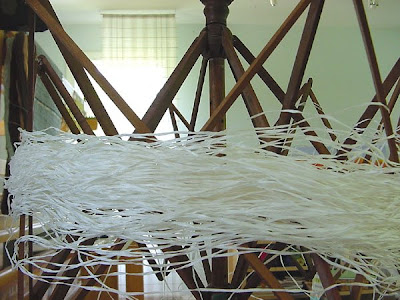 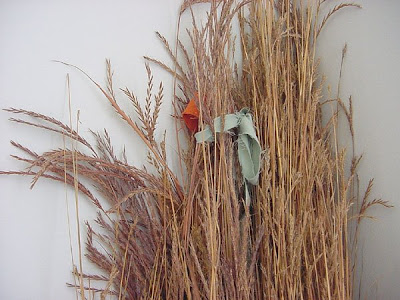 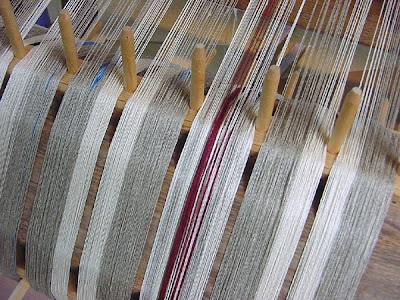 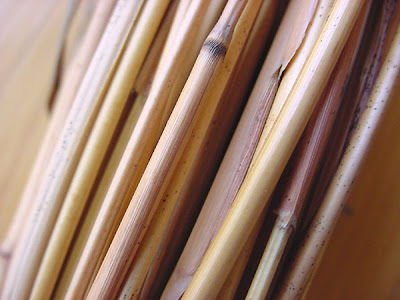 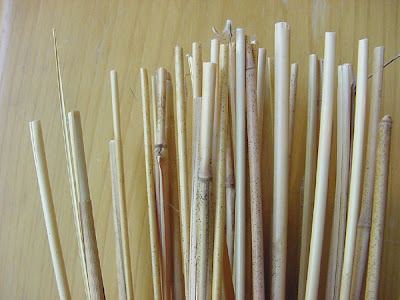 Here are all the ingredients for my next grass, linen and japanese paper yarn weave. My unbleached 20/1 linen warp is finally wound on and correctly threaded, though a demon must have been in the loom this time. The 5 yard warp was days in the making. Errors kept showing, and I had to rethread it again, and again. I finally quit fighting the frustration and submitted to the process, until there were no doubled threads or two threads to a dent. Though it was just plain weave it certainly got the upper hand this time.

The yarn is paper yarn with a silk strand, from Habu, and the grass is the native midwest prairie grass called Big Bluestem. It is a sturdy stemmed, jointed grass that has a blue cast coloration when it matures in August, and is about 4 - 6 feet tall. These prairie grasses covered the Great Plains when western settlement happened in the 19th century. Gradually they were plowed down as crops were planted, but now there are many who wish to restore these native grasses and flowers to our lands. We cut bluestem grass stems with a scissors in late August,
when the grass is ripe, and let them dry in the sun before bundling and storing them to weave. I think they resemble bamboo, and remind me of Japanese design when I weave with them in Swedish linen warp.
Posted by Avalanche Looms / Susan Johnson at 11:30 AM

Thank you for your blog about grass weave. We have approximately 1/8 of an acre in native grasses, and I've been wondering if the dried blue stems could be useful in weaving.