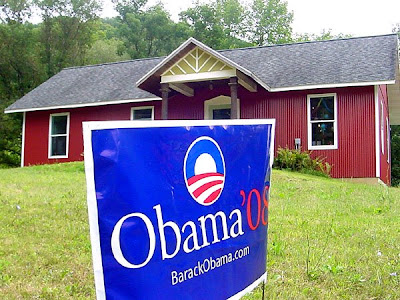 All right, I took time out from weaving today to plant my yard sign. Then I mowed the grass around the sign, so it didn't look too shabby. It's time to get serious about this election. I wish I were voting for Hillary Clinton to become the first woman President of the United States, but I can support Barack Obama. I do wonder why is it so difficult to elect a woman President? Everyone has met women, has women in their families, has women friends, bosses, teachers, doctors, lawyers. Everyone has a mother. It's not as if women are strange or unknown. Women are more than half of the population. Why can't a woman become President? It isn't just, it isn't democratic. It's just bizarre.

Quality, affordable health care is what everyone in this country needs now, and it is the issue I care most about. Children need to see dentists. Women need mammograms. The elderly need not to be afraid that their health insurance will be whittled away. Barack Obama and the Democratic Party identify health care as a basic human right. It is.

I hope enough people feel the way I do about the present abysmal state of health care, and vote Democratic in the fall election. Now, back to work on the black and white doublebinding rug.
Posted by Avalanche Looms / Susan Johnson at 5:10 PM

Lending my voice to yours.