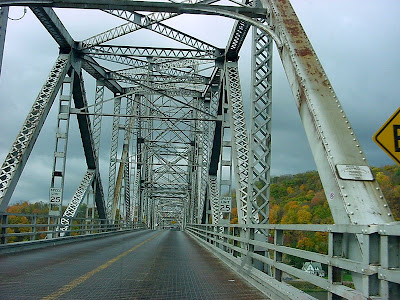 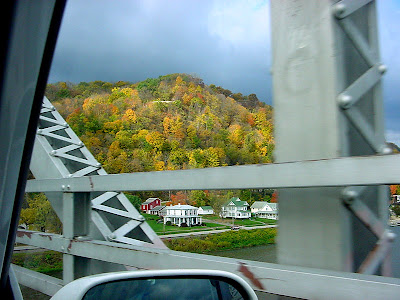 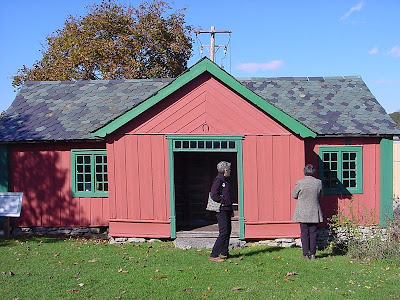 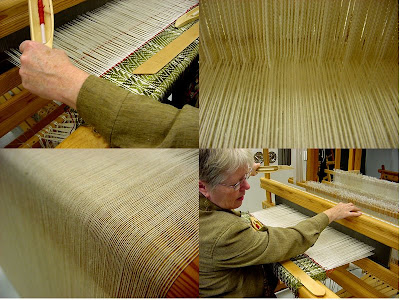 We made a little trip to Iowa, crossing the Mississippi River at the dangerously narrow, and high bridge at Lansing. Crossing my fingers and holding my breath, lest we meet a large truck coming from the opposite side, we survived that one more time. Kathy, Jean and I then drove on to Decorah to the Norwegian Museum, Vesterheim. There we met Syvilla Bolson and her student Sandra, a weaver working on a traditional Norwegian weave. The 16/1 linen was set at 40 epi, in a 20 dent reed, 2 ends to the dent. There were six frames threaded, two for tabby, and four in the pattern. There were 1480 ends coming off the back beam, and presumably, all the way through to the front.

Sandra was very gracious to let us watch her, and I hope we didn't cause her to make a mistake!

Kathy and Jean peeked in the windows of the little house behind the museum, a house I believe brought here in pieces from Norway. It has a charming slate roof, and at one time, long, long ago I dreamed I would be happy if only I could live in a little place like this for the rest of my life. Maybe I would still.
Posted by Avalanche Looms / Susan Johnson at 9:59 PM

That sounds great! Except for the scary bridge...

I thought I'd stumbled into a Star Trek episode in the second half of that first paragraph... very technological!

Such a perfect day, yes.
The bridge is, was, and always will be scaaaaary!
It's a WEAVING blog, Dirk, & I'm sure some people who read this are wondering if I've ever heard of it.
Thanks for reading it anyway.