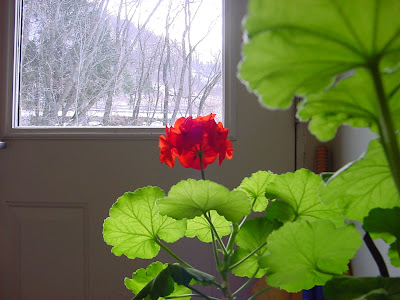 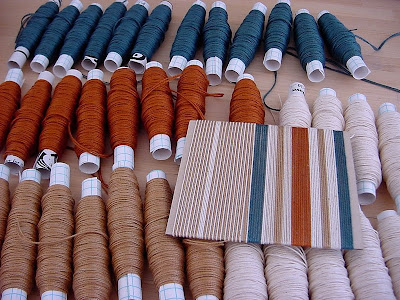 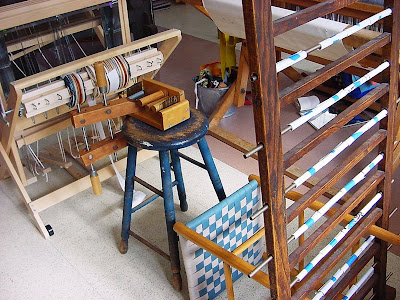 The first picture of an actual train wreck is for comparison to the last picture, which is my regular warping set-up. The train wreck happened late last year near Dresbach, in Minnesota.
One freight train on a side track suddenly started up and drove into another freight train rolling by. One engine ended up in the Mississippi river. I think a train is a good metaphor for how warping should proceed, like a good machine. And how, when you least expect it, it can look and behave like a train wreck. My warping set-up reminds me of a train the kids used to build across the living room floor. First is the spool rack made from the old baby crib side, the stool lying on the floor is the base, the tension box is clamped to the upright stool, the fishline counter is missing from this picture, then the back beam.

The geranium keeps on blooming in its sunny spot, oblivious to trials and tribulations which do not concern it.

Today, I'm still putting on my Depression warp, and it's become depressing. Especially since I think the 5/2 perle cotton is too thick for the close sett 40 epi, and that 6 yards was far too much warp to expect this little loom to handle. That the tension will be lousy and the projects will look like mattresses stuffed with dead cats, with all due respect to Feltbackie, who just crossed the theshold, and not what I wish to see. I will have to chop the whole damn thing off. All my good yarn, and the week I've spent putting it on, to make 12 potholders.

It occurs to me that the yarn should match the sett and both should match the loom. The little loom is doing its best, but it's just not right.
Posted by Avalanche Looms / Susan Johnson at 12:08 PM

Oh my goodness, sounds crazy! I hope it all comes together and you don't have to cut it off :)

me too, but I have cold feet.

I really like you're first picture it's very artistic!
Great blog!

Visit My Blog
By Arcadia

Arcadia, Thanks for looking at it