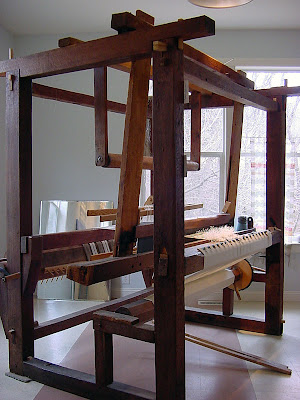 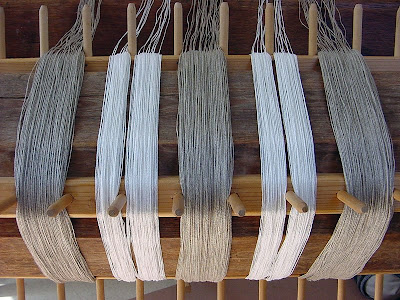 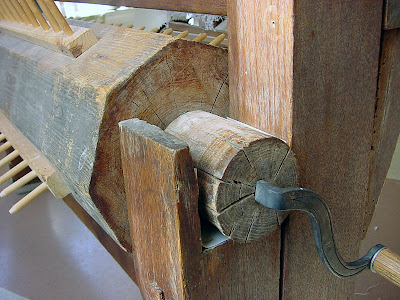 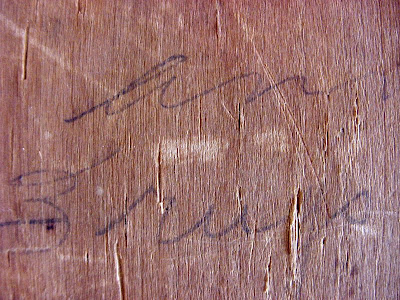 "Our tools are very much a part of who we are."
--Ray Kurzweil, futurist

When I first saw this loom, in 1980, it belonged to another weaver. At that time, I didn't know front from back on a loom, but seeing this loom, I distinctly remember an inner voice speaking up: if this loom could come into my life, I would become a weaver. And, soon, strangely, this came to pass. The weaver decided that the loom took up too much room in her studio, and she wanted a smaller, 4-harness LeClerc. She asked if I could store it, and so I brought it to Avalanche, 4 miles up the road from Brush Hollow.

It is a Norwegian style, counterbalance loom. These old hand made looms are called barn looms, either because it was built with the same construction as the log barns in this area, or because it was so large it was only set up during the summer, in an unheated outbuilding, to weave. It has 2 harnesses, two treadles. Step on one treadle, it pulls that harness down, and by pulley action lifts the other harness.

It has a massive wooden frame cut from trees here on the old Norwegian immigrant farm, where they built the house, and the barn out of logs, and then the furnishings. The back beam is an octagonal shaped single log piece. The sectional rails were added to it, but the circumference of the log is 30". I don't know how much it weighs, but it is heavy. The overhanging beater is typical of Scandinavian looms, and this one swings easily, and beats with a satisfying thunk. It also creaks and squeaks a little. I think it sounds like a wooden boat. It was made ca. 1900. There is no maker's name on it, no date. A few notes penciled on the side of the beater in a weaver's hand say 3 rugs were woven for Martha Overbak. It came with no bench, but I can see where one was bolted on and removed. I learned to weave standing at it.

Once it had a fly shuttle, a contraption that flung the shuttle through the weaving shed. That was gone, like the bench, but the beater is a foot wider on either side of the loom to acommodate that mechanism. Weaving on an antique loom I often wonder who wove on it before me, and what they wove. The weavers are most likely ghosts now. They most likely wove rugs, or toweling. Maybe blankets. This was not a loom for fancy weaving.

At first I thought I should saw off the extensions on the beater, since I had small children then, roaming around the loom, and feared the beater accidentally hitting the 2 yr old. But I didn't shorten it, and there were no accidents. The beater packs a rug beautifully. It also turns out that the loom is very good to weave linen on.

When people visit here, and see this loom, they are often reminded of a grandmother who wove on a loom just like this one, only hers was much bigger! I think they were probably much smaller then, and have an enlarged memory. To thread the loom I sit inside it, and I lean into it while I weave. It feels like a room inside this loom, a spacious room from another time, and is still a good place to be.
Posted by Avalanche Looms / Susan Johnson at 11:23 PM

What a wonderful post and what a huge loom!

Hello Susan, nice to reed why these looms were called barn looms. It is a beautiful loom I hope to own something like that someday.

I remember this loom the most; we used to use it as a jungle gym to show off when you were selling looms to visiting bed-and-breakfasters; I think you ignored us with a sophisticated grace considering the circumstances! We must have looked like a bunch of socially challenged home schoolers or something! Anyway, I can still hear how it beats and the creaks and noises it made. Maybe because I was in the womb when you started weaving on it. Maybe if I become a "real" weaver I can put my name on the bottom of it...

This loom is not a piece of playground equipment!

There is a majesty in this loom, the worn wood, the color,the simplicity and of course its size. One wonders about the rugs of its past, for whom they were woven, and their destiny.

I love this post, Susan! I love this loom and hearing about the history of it. I'm the same way with old things, especially tools and things used for making. The history and what it has made and who used it are all so intriguing. A connection.

I discovered your blog while attempting to research an old loom I recently bought. I am relatively new to weaving (this is my third loom, and I've been weaving for a few months) and I'd love if you would have a look at my loom and tell me what you can about it. And if you know of anyone who could perhaps give me more info, please let me know.

You can see two pictures of the loom on my blog at:

I would be happy to email you with what little info I have about this loom. Just leave a comment on my blog with your email address (I will delete it from the comments if you'd like) and I will tell you what I know, and send more specific pictures if you want.

Thanks so much, and I'll be back to your blog, I love it!

Rayna, Your loom is wonderful. I hope your finding it is as significant to you as finding mine was to me. And I ended up paying $300 back then. It made me into a weaver. Since then I always see something in my loom coming towards me just beyond the beater, so many possibilities, another rug, another linen piece. Like standing downstream, looking up to see what's coming next

I loved reading your wonderful post about your beautiful loom. Makes me feel quite nostalgic. My Megado electronic dobby looks quite boring in comparison with this wonderful beast but maybe it too will have history and a tale to tell to someone once I'm long gone. I do hope so. Beverley

Really every children get pleasure in the playground place for playground equipment.

Great job for publishing such a beneficial web site. Your web log isn’t only useful but it is additionally really creative too. There tend to be not many people who can certainly write not so simple posts that artistically. Continue the nice writing More