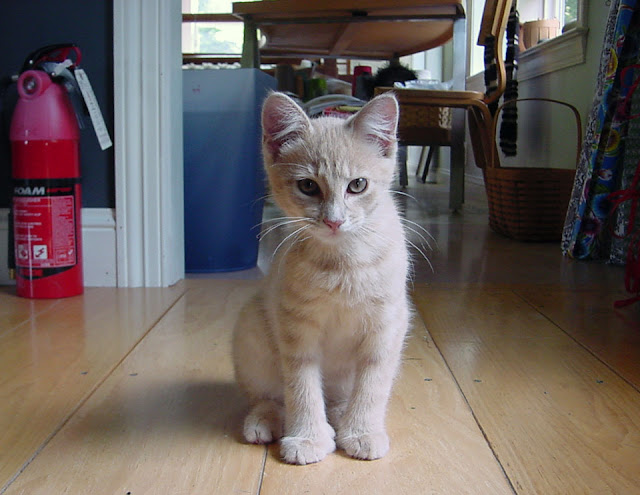 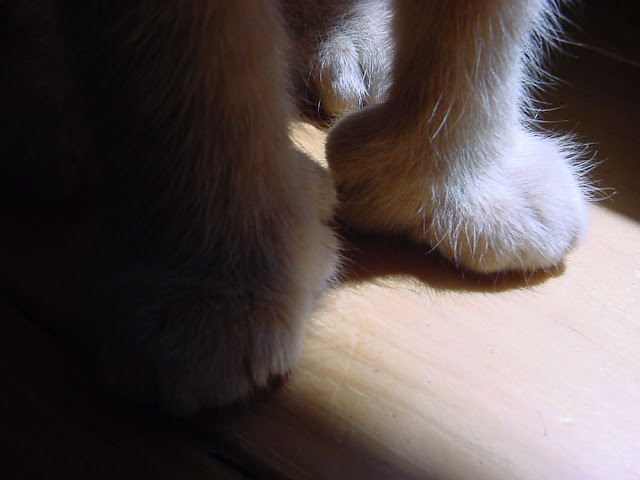 On the verge of despair over the presently unfolding political catastrophe of the Debt Ceiling games, I'm focusing on my new kitten. I brought him home because of his poly-dactylism (paws with more than the usual number of toes) but have also discovered his charming personality. I knew I'd like him. To play with a kitten doesn't mean I'm no longer a Feminist, Marxist, Cultural Socialist, it just means I'm going to give it a rest.

The little cat was here in the store on Saturday, until I remembered the folly of allowing a  kitten in a weaving workshop.

My new rosepath scarf warp in 16/2 softest Swedish cotton, charcoal gray and the color of a luna moth,  was clawed and tangled even more as I tried to extract him, and the 36 claws he might possess.
(I haven't been able to get a good count of the toes yet, but there may be as many as 9 on each paw).

Meanwhile, customers arrived, children, parents, grandparents, campers from the campground across the street, two of my cat-craziest customer-neighbors (you know who you are).  The air was conditioned (very cool) and the kitten was frisky. No one was in a hurry to leave.

Since he isn't named yet, I soon had a list of kitten name suggestions, and people advocating for their favorite.  Jasper, Chester, Felix, Smoky, Hector, Goober, Tootsie, Thumper, Killer, and Stanley.  Several people strongly favored Tootsie.  I like Iko, not sure why.  But so far it seems to come down to Big Foot, the obvious name.  Kitten enjoyed all the attention, and I felt my ominous black-cloud thoughts lifting, refreshed in the company of good-hearted people.
Posted by Avalanche Looms / Susan Johnson at 12:08 PM

If you end up with "Big Foot", you could nickname him "B.F." which could also stand for Best Friend. Or BFF which could be BiG footed friend or best friend forever etc etc....

Too cute!
Congrats on your new joyful addition.

Good distraction! He is too cute.

How about Tom Thumbs....and just call him Thumbs (as in "all thumbs")

ha, ha. I love these ideas. BFF would be easy to remember, and it's pretty darn cute. Thumbs is also appropriate, but not too cute.

Shhnumpf- shnumpf??
Are you serious? You sound like someone who might have named a poly-dactyl cat, Shoulders. But, I'll take it into consideration

As usual, the question of naming comes down to, Will it Stick?

I was thinking "Star" would be a good name for your kitten.

Clearly, he has many good "points".

I vote for Iko!
I like short names, and this one is really cute, just like your kitten ;-)

He is a beautiful little fellow... we had a fellow just the same sandy colour. His name was Linus.

Good luck with the weaving with this little fellow about. Talk about cat heaven.

I am opposed to Killer or other names implying violence. I think Iko's a fine name. I'm also confident you'll choose the name that's just right for this little sweetie.

Naming the cat is for our own convenience, to differentiate from our old mother cat, as in "Did you feed the cat yet?" " Which cat? The new cat?"

Whatever we name it, the kitten will probably ignore it, reliably responding only to the sound of the cat food can lid opening.

I like Iko, which my dear ones will probably change to Ikea.