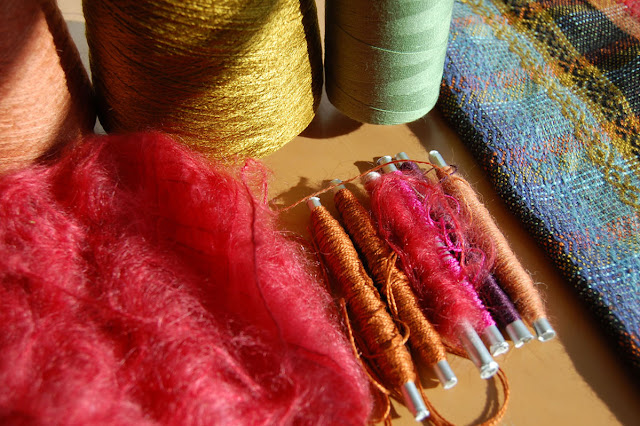 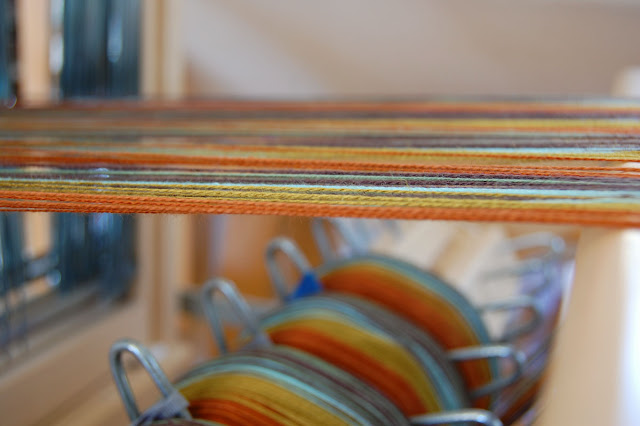 I don't expect to be a speedy warper, but I want to dislike warping less.  This week I discovered a new warping trick involving my well used plastic, wide space comb, from the Dollar Store, and some masking tape.  I've significantly improved my warping efficiency. I may even look forward to it, a little. Eureka! 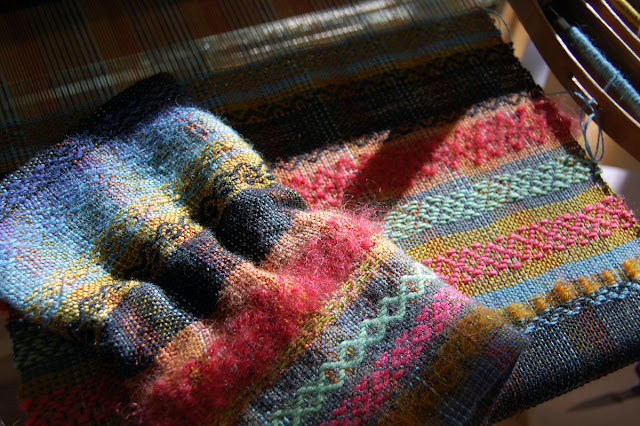 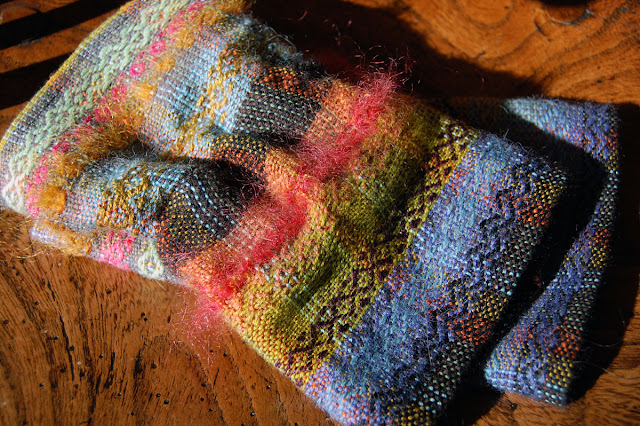 I also gained an insight this week, for the last time, I hope.  It takes a long time for insights to  penetrate this head,  I've noticed.  Here it is:  When a warp goes wrong, for any reason, DO NOT PROCEED.  I should have this tattooed on my arm.  By some habit of mind, in the part of the brain where the most primitive ideas hold sway, I cling to the idea that frugality is the first principle. This is  my default option. I'm usually not aware that I am choosing it.

But to be frugal with materials, and not with my time is the wrong way to better, more profitable weaving.  Deciding to remove warp that is wound unevenly, or has knots, or any number of other possible problems, or defects, before weaving begins, does waste that warp, and the time already invested in the warping.  Making the decision to cut it off, throw it out,  and start over is difficult, but saves so much time later on in ease of weaving. It also assures better quality in the finished woven fabric. Weaving better quality in my weaves is my goal, as well as  making better designs, with better colors. I know this is not news to most of you, but I want to state publicly that I now know it, understand it, and will live by it henceforth. I've seen the light.

Being frugal with materials, trying to save every mistake, is false economy. I'm only fooling myself. The highest value added is my time,  not the yarns.
Posted by Avalanche Looms / Susan Johnson at 11:40 AM

Do share your trick with the comb & the masking tape, please.

I had a 8 1/2 yard thin cotton warp that was impossible to beam on because the twist in the yarn was causing the warp threads to twist an tangle together. It sat accusingly on my loom from March to August, when I figured out a trick with the wide spaced plastic comb.

I'm finally ready to start weaving on it again.

You amaze me with your beautiful work! Why do we artists hate to stop to fix problems?! Sounds like you've learned! I LOVE your banner btw.

I have a tough time with that one, too. but you are so right....time is money.

handcraftedw/attitude, Plastic wide sett combs rule!
Not much of a trick, but next time I'm at it I'll take some pictures

Kathryn, you amaze me with your beautiful work!
I'm lazy. We'll see. and thank you!

Hilary, You know what I'm talking about. Save time, weave with ease, learn from mistakes, eventually, win, win, win

They don't call you Barb-the-Scissors for nothing!

I now have a collection of plastic combs :) What do you do with the tape? I'm all about making my life easier.

I, too, use a wide comb, but can't wait to see how the masking tape comes into play. Always looking for ways to improve the process!

I hope you won't be disappointed. I'll take that picture next time and post it.

It helped me because I warp sectionally, back- to- front, and, even after all these years and looms, I've never figured out a good system.

Ahhhh....I don't have a sectional beam, and am a back-to-front warper, but I'm still interested in seeing your use of the masking tape. There may be an adaptation for me.

I'm a back-to-front warper as well. Even so, if the masking tape trick helps I'll be ecstatic. I want to do more cotton, but not if it goes like the towels I've +finally+ started weaving on.

I'm going to post my version of the alligator clip temples this weekend. Sharing the tips is mandatory ;)

I definitely want to try back-to-front some day.