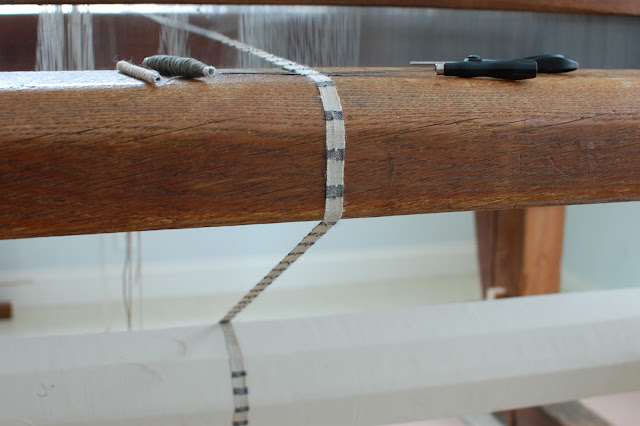 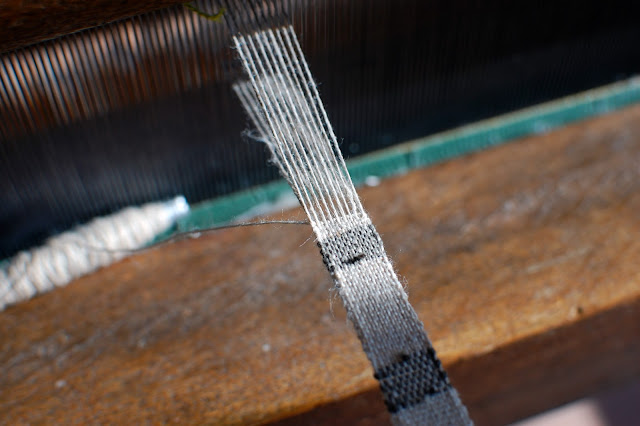 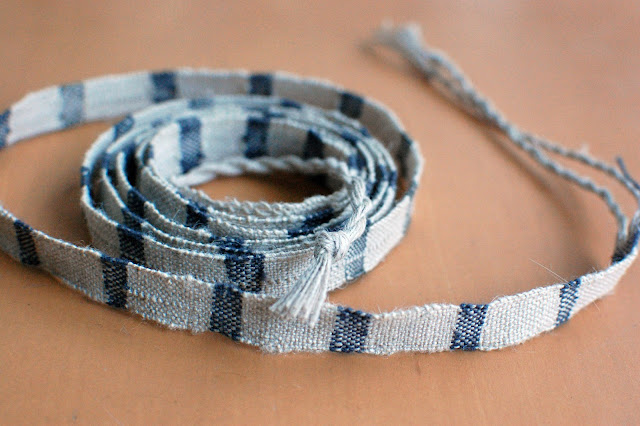 I spent the day weaving a 1/2 inch black and white stripe tape on my old barn loom. It's the narrowest weave I've ever set up on that loom. Overkill?  It was a long section,  leftover on the backbeam,  when I cut off my paper flower weave.  I took out some of the ends, and kept just 18, which I double sleyed in my 15 epi reed. I don't know if anyone else would do something like this, but I've been quite interested in tape weaving lately.  This tape is strong, and definitely rustic. I made it with linen and hemp, and it beat up amazingly tight, but the swinging beater probably weighs 50 lbs.   Maybe I'll use the tape for loops on things that need loops. It's heavy tape, so it should be for something that needs a sturdy loop, not a face cloth. Maybe a Finnish pukko hanging at my waist.  I feel like wearing  a knife.

I read Kathryn Clark's interview with Selvedge magazine's Polly Leonard,  last night. Polly said there are enough scarfs and cushions now. Textile designers need to think of other things to make with their cloth.  I don't believe that.  Yes, there are a lot of scarfs and cushions, but that's like saying there are too many blankets, so stop weaving blankets.

Feeling a little touchy these days, with the wintery mix falling outside,  and the cats won't go out the door.
My husband criticized how I buttered my toast awhile ago, and suddenly I feel irritated. 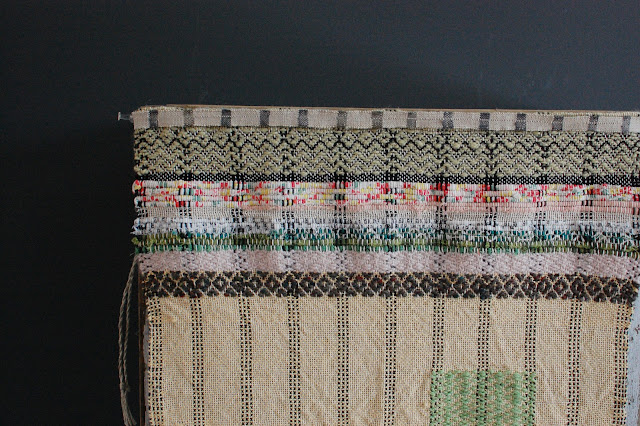 Posted by Avalanche Looms / Susan Johnson at 11:04 AM

I've felt like trying to weave a tape lately too. Usually I braid some yarn kumihimo-style if I need a loop for something, but I like the idea of making something so tiny on my big loom.

All this cold is making me touchy about weaving. I've re-threaded a re-sleyed a simple (!) scarf five times now. Just can't get the right thing going.

Have to say I'm tempted to agree with the editor of Selvedge, but whom am I to say I'm a tapestry weaver so don't weave anything useful, a bit od a sore point at times

Love your tape...what a great idea.....it's perfect.
and husbands can be like that.
You can butter your toast however you like, in the end.

That tape would be great in handbound books, the kind where the tape is structural and shows on the outside of the covers.

limiting creativity can be either inspiring or stifling. scarves and pillows are useful objects that are obvious ways to express our personal taste and style. maybe they are less risky than jacket or wall hanging but they still impact our daily lives. the little things are important.

Personally, I love that tape!

Hilary, It's the time of the year for resentments to build in the cabin! Ha, ha. I can't forget to take my Vitamin D!

Debbie, Tapestry, yeah, kind of low on the functional scale. Anyway, I'm not saying anything about function, really. A weave doesn't have to be anything else--still, just because it's a scarf or a cushion, or a mug rug, for that matter, those are just forms for the weave to take.

Alice. It would be a great tape for some kind of hand bound book.

Amanda, Vitamin D! and tape weaving. I never paid much attention to it before, but I've definitelyl been bit. I saw some Yutubes of Eleanor Bittle and The Art of Tapeweaving, and I was hooked. Look at your own risk!

i like the contrast between thin and huge, strong and stronger. i've been snarky as all get out. grrrr!

and, alice is absolutely right. sewn on tapes structure, with your decorative tapes. they could lace in and out through the front and back covers. lovely!

haha, I am just going around and planning to weave some scarfs and cushions. But then I am not a textile designer, can do whatever I want :)

Can relate to your touchiness too, we need more light and warmth already!

Never too many scarves or cushions! Both so useful and great ways of trying things out without making something huge! Love that tape.

I'm imagining spearing the piece of toast on the pukko and delivering it to your husband.

Cabin fever: smile and nod. smile and nod. And keep weaving. I already have six more ideas just reading these comments. Thanks, everyone, including the one-way butterer!

Actually, it turned out to be a pretty nice day, though the beginning seemed a little rough.

Oh my, I LOVE that tape ... if you ever think of selling some, I'd love it. I'd sew it onto an indigo dress, just a simple line statement.

Hmm, was that my interview with Polly Leonard on Handful of Salt you read? I interviewed her last year and she said those very words to me but perhaps she says that to everyone. Yes, that response surprised me too. And I have yet to know what to do with it. I've been turning it over in my mind and pondering. She does have a point though but there is still plenty to be discovered in the more traditional expressions. You do a lovely job of that, so impressive!

Kathryn, Yes, yes. It was! I couldn't remember the next day where I had read the interview. I was so interested in what she had to say. It is a strange idea, and I think she had not given it much thought. Or had just seen one too many a scarf or cushion

For me, it was just that kind of morning-- that mild criticisms curdled my coffee.

I'm going to link back to your interview, and thanks for reminding me. People would like to read it for themselves. Not to get a posse up in arms, but just for the sake of discussion.

I'm so happy to see that you did this. As a new weaver, I have been thinking that I would like to make a skinny long strip for bracelets, but thought that like you said it might be overkill to use a big loom for that. Well, why not? Are there really any rules about that? And are there rules about buttering toast? I'm irritated with a lot of things right now too, mostly the cold!

Tracey, using the beater on the big loom made this into a very stiff tape. The small tape looms seem to be using wider setts, and thicker yarns. They don't even use beater, but the back of a thin shuttle

I don't know what the rules are. I just had some leftover warp on the beam to weave off, and I thought I'd try a tape. And I liked what I got. This doesn't always happen when you start goofing around on the loom. I'm so glad you're weaving.

I read that interview too and it has prompted me to think about other things I could make with my weaving. I'm a new weaver though and definitely not selling anything. My next project is cushion covers lol.

I love, love, love the tape ... I'll be warping up something very narrow very soon.

Claire, we are making weaves that take shapes--a cushion is a way of making a 3D textile. A scarf is proportionally a long and narrow weave that allows a progression of design, repetition, or asymmetry to be developed. A potholder allows different format. Basically, whatever inspires the weaver is the right thing to make

Have fun with what you decide to make.