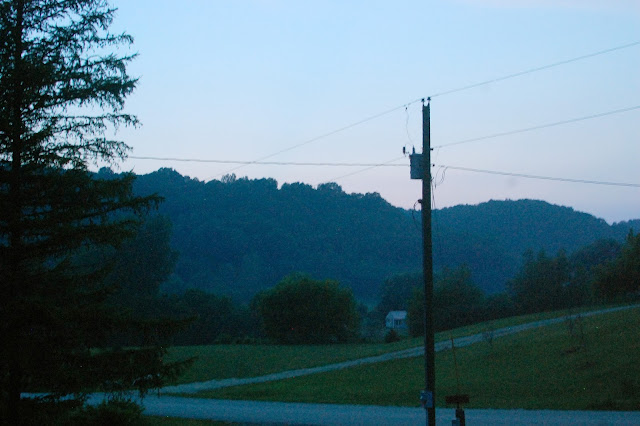 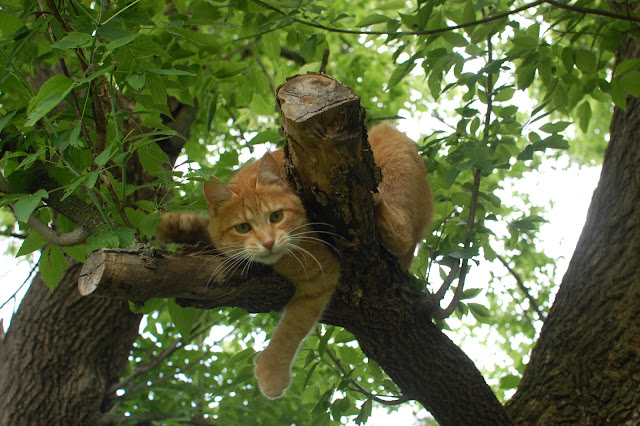 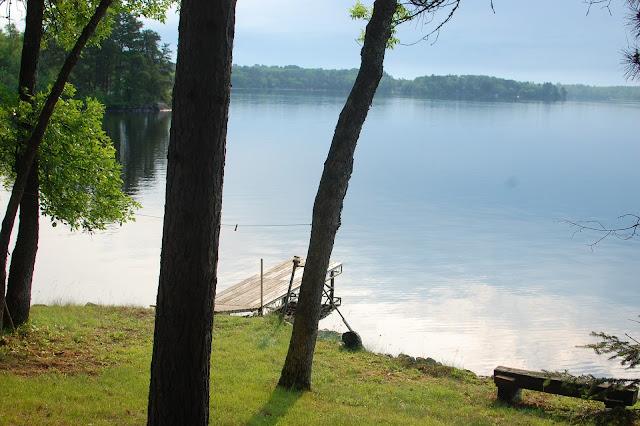 A loud crash on the porch after midnight,  woke us up,  but we didn't investigate.  In the morning we saw the bench  overturned, and the porch broom knocked down.  My good cat, Mikey, did not show up for breakfast.  Mikey is an orange striped tabby with polydactic paws. He has many toes, in fact, he has almost 2 sets of toes on each front foot.  His paws are oversized, and fan shaped.  On the points of his ears are several long sable tips, like fine haired paint brushes, that remind me of a cougar.

He did not appear that day, or the next.  I  began to wonder where he'd gone, and walked all around to the sheds where he normally sleeps during the day, calling "Mikey, Mikey?"  There was no sign of him, not hide nor hair.  I rode up and down the road on my bike, looking into the ditches.  No sign.  He'd vanished, who rarely, if ever,  in 2 years had missed a cat food dispensation on the porch.  Mina and Mama Kitty were still there, but I realized now, I loved him best.  There was none other like him. And now he was gone.  Another day, and another, and I stopped calling for him, or looking for him, or expecting to see him. Deer wandered through the yard, the stray black, tailless cat came to sneak food, but no Mike.

No Mikey looked in the kitchen window past the toast counter in the early morning.  No Mikey annoyed us when he hooked his claws into the porch screen door, banging it open and shut to get our attention.  No Mikey threw himself down in front of our feet as we tried to walk into the kitchen. My husband came home from the grocery with a smaller bag of Meow Mix.  Mikey's disappearance was so mysterious, and sudden, timed with the fracas on the porch.  What did it mean? We've lived here so long, and there has never been anything  frightening on our back porch.

Day 5. I decided it might have been a cougar attack in the night. I looked in the newspaper for possible cougar sightings in our neighborhood, but for once, even though this is the season for unverifiable cougar sightings (and UFOs), there was no mention of aliens or wild cats.

I called my mother on Sunday.  She is old now, and  losing her memory.  I talk to her about things she doesn't have to remember.  I told her my cat disappeared. It felt so good to tell her, because she has always reassured me.  That wart on my  foot will go away.  No,  the Russians will not start a nuclear war, during the Cuban missile crisis. How to shut down a 5th grade boy who was bullying me.  She was sorry.  She said, "Don't give up hope."

"But Mom," I said, "Country cats disappear.  Your cats in Northern Minnesota didn't last too long."  "No, they didn't"  she said,  "Pa wouldn't let them stay in at night, but Marion and I fixed up a place for them under the porch, and sometimes they stayed there."  She used to tell us how her cat's ears would freeze in the frigid N. Minnesota winters,  and get rounded-off, like mouse ears.

That night,  just before I turned out the lights,  one week after the incident on the porch,  I heard a small meow at the screen door, and I knew it was that gone away boy-cat, Mikey, come back from oblivion.  Oh, joy!  I let him in, and he seemed fine. No slashed ear,  missing fur, or mark on him.  He must have been on a sabbatical, or kitty rumspringa, trying out new worldly ways.  I was so glad,  I  rubbed him, scratched his chin, picked him up, carried him around, squeezed his fat paws.   I love the moment when the story turns,  after all hope is lost.  I love when the cat comes back!

Of course, you know my story is about how my mom is disappearing, and that story doesn't have the twist, when her memory suddenly comes back.  She will keep fading into the fog that gets denser all the time. Another time, and  this good cat will disappear, and I will disappear, all good things, and bad, will.

But, it was a pretty good week, my best cat came back, and my mom and I had a nice talk on
Sunday. I'm starting to understand.

Beautifully written. I slowly lost my Dad so I can relate. How wonderful that Mikey made his way back home.....

A beautiful essay. Sometimes you do get a second chance.

Cindie, I'm not the first to go though this with a parent, and I'm sorry for anyone who has.
I didn't know how to write about it. Somehow the cat's coming home seemed like a place to start

Alice, or take it as it comes. Thanks for reading again.

I felt my stomach drop when I read the title of your post. I have a "Mikey" of my own, and here in the mountains of northern Arizona, outdoor cats can and do become victims of the resident coyotes, owls, and other predators. It is the price to be paid for allowing cats their freedom and quality of life.

Life itself is one long farewell to all those we love.

Well I wish I had read this yesterday, but no matter, another wonderful piece of writing, like a poem with a bit of the profound turning up toward the end. I'm glad Mikey came back and also glad your mom is still with you. You can still hear her actual voice say "don't give up hope" Treasure the sound. I know you do.
.

each day, each moment fleeting for us all.... a lovely tribute to a difficult situation. ~blessings~

I'd love to give that cat a hug--he's adorable, and no wonder you spent time squeezing his paws.

Your writing is superb, as always, and your blog a joy to visit.

Thank you for sharing

Dawn, it's all so ordinary. I want to write something about how it is, mainly so I remember.
Oh, that Mikey. I was ridiculously glad to see him again. I've heard that toxoplasmosis infects us to cause us to like cats inordinately!
What if all our human emotions are just infections? It probably doesn't matter

Many years ago, my black and white cat, named Stanley, disappeared. It was the middle of winter, and I searched and searched for him. What I didn't know, was that he had befriended the little old lady just up the road, who was sick with cancer. He stayed with her for 3 months, until she died.
Then he came home.
So glad your boy is home. Maybe keep him in at night?
Nah, probably not his thing.

Your story touched my heart in so many ways. Your pictures made me cry. I had a "Mikey", his name was Patches but I called him Roo (short for Patcheroo). He was the funniest, silliest, loveyist cat ever. Orange tabby, just like yours. A storm came up, wind blowing, rain pouring. I ran around the yard trying to find him and his sister, Lilly. No Roo, but Lilly happily went in the barn for shelter. An hour passed, no Roo. Calling, calling and calling for him. I believe the wind and rain had him confused. He unsuccessfully crossed the road. Tears poured down my face with the rain as I picked him up and carried him home...back by the barn to his final resting place. I miss his silly self everyday. My heart broke for Miss Lilly. That was about a month ago. Miss Lilly was a quiet girl, standoff-ish, never meowed. She is now my lover cat, meows all the time. I walk out the door, she comes running to me. (Thankfully she is deathly afraid of the road). We got each other through a rough month. She is an outdoor cat, but I put her in the barn at night...I can't bear the thought of something happening to her.
Enjoy every moment with Mikey. I would give anything to watch Roo dig in the snow, climb the trees, terrorize the birds, purr so loud you can hear him from 10 feet away, sleep in my arms and protect his sister. I think Roo and Mikey share the same spirit.

Kari, I'm so sorry about your Patcheroo. We know our animals so well, and there is such an empty place when they're gone.
Susan

Well Mikey, you did give your mom a good scare, didn't you?
So glad this had a happy ending, Susan <3

Karen, Maybe, maybe not. Since he came home he has spent a lot of his days trying to fight with a stray cat. I think he was away at fight camp! He had boy-cat surgery when he was still a young cat, and I hoped he wouldn't want to fight. Sigh.

I enjoyed this story so much, beautifully written.

Oh joy, I am so glad your best cat came home !! The cats, I love them so very much, I have two, mummy and a very cheeky one. I have a favorite too, but never make an obvious difference when they are both there.

Modern Country, thank you for reading! I loved Mikey best because I thought I'd never have him back again. He was suddenly the most precious, only one I wanted. Once he was safely home again, I began noticing all his faults again.