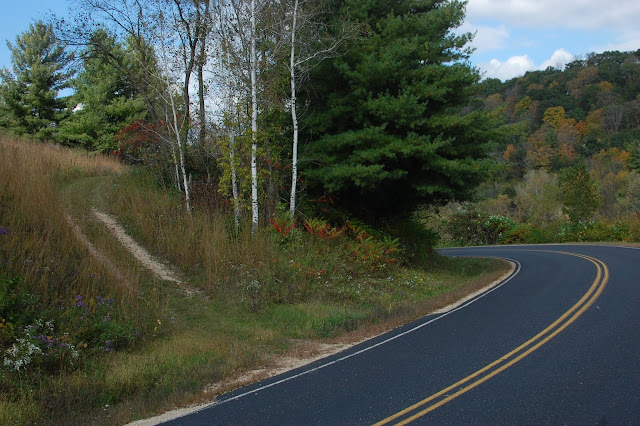 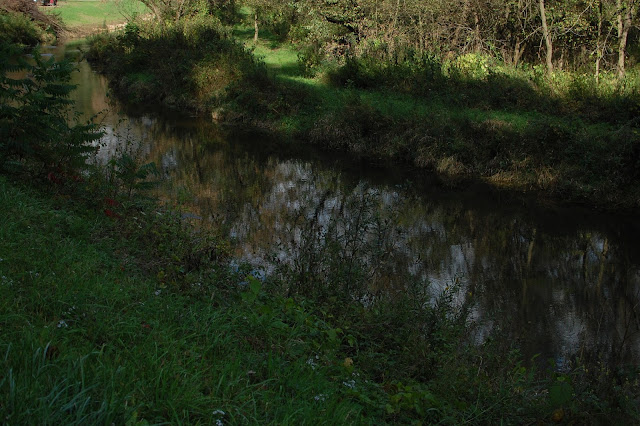 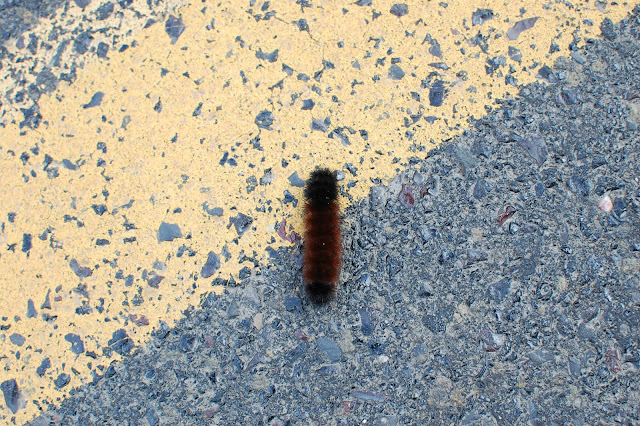 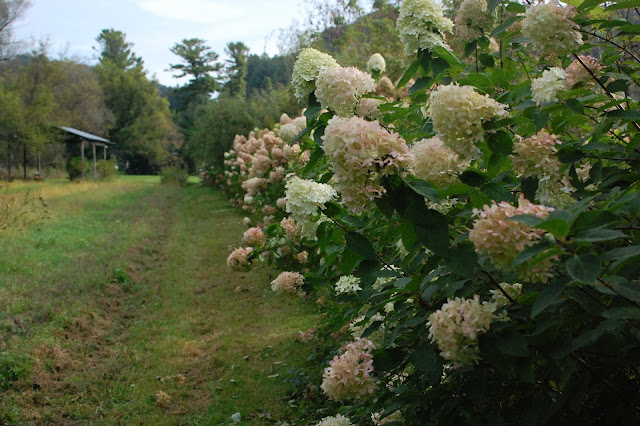 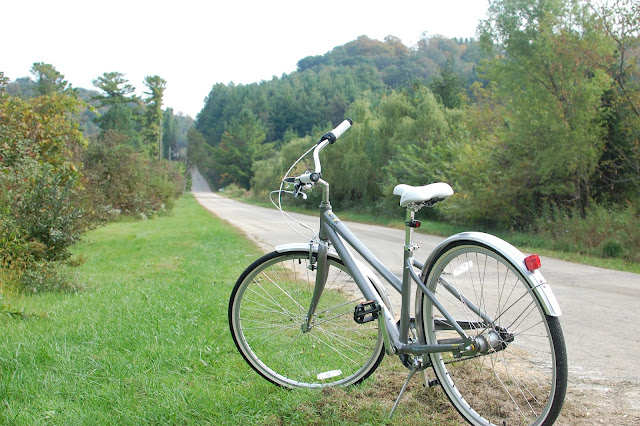 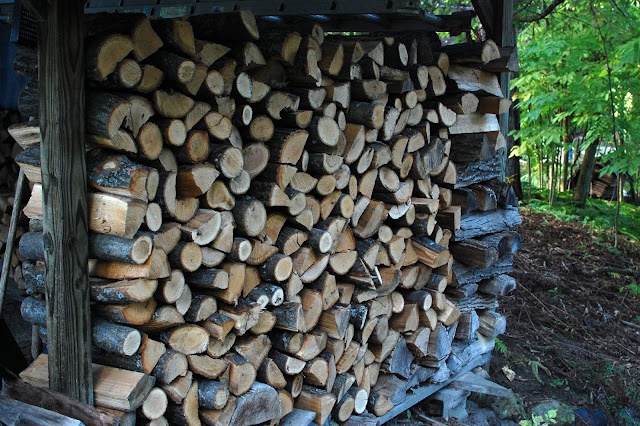 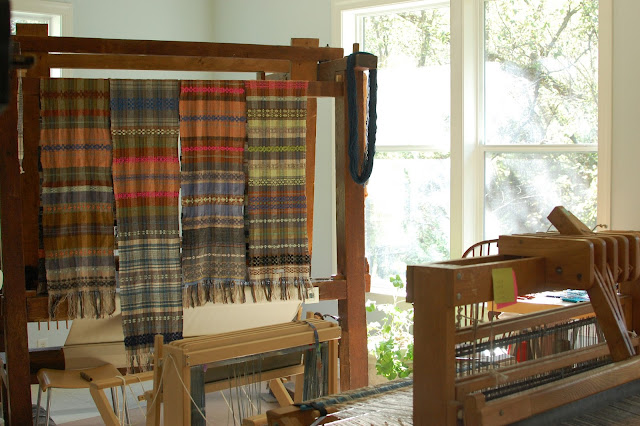 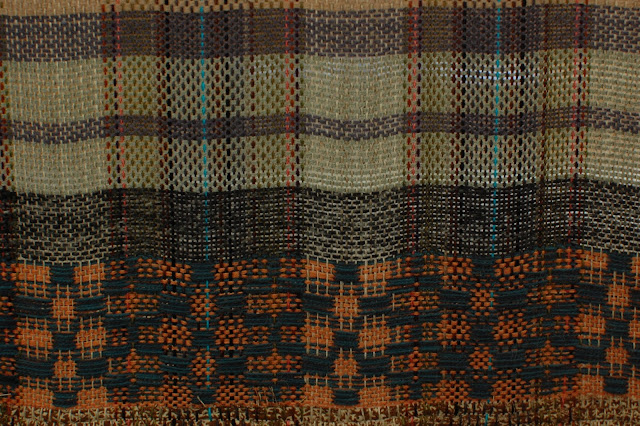 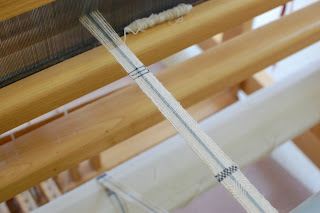 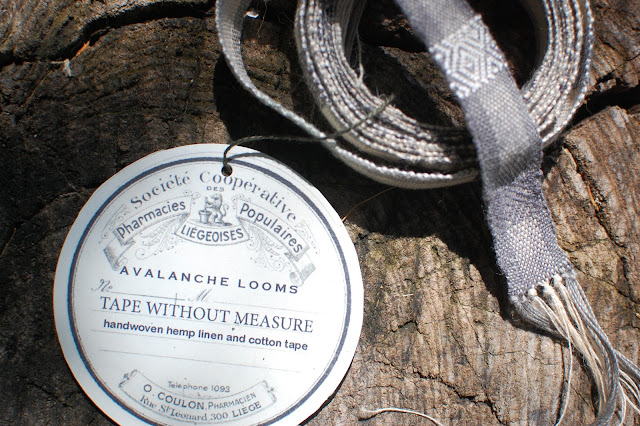 The walk to my studio from my backdoor is just 50 yards, on the old milking path, all that remains of a long gone 6 cow barn, and over a small creek on a wood foot bridge. It's not a strenuous walk.

I have come to believe, that in my own best interest,  I need at least 45 minutes of dedicated Exercise each day. To persuade myself to do this,  I decided to take my bike out, on my way over  to the workshop, and ride 4.5 miles up County Hwy S,  to the next town, Bloomingdale, and back.  I call it my commute.  I do it everyday,  not "every-other-day" or "3 times a week" or some other euphemism for "maybe I'll just skip it today".  What I get from this "exercise" is to see the beauty of the river and the valley, in every light and weather, day by day, and to notice so many amazing details of life along the river, each day that I ride.  My body appreciates the workout, and I am energized.  All positive, and the cherry on top is that I get to weave when I get back!

It's working pretty well, and the season isn't over yet, though I have needed my down jacket and  mittens once already.  Once I'm on my way,  I'm glad to be riding.  I rode my bike so much this summer that I actually broke my pedals off, and had to replace them!   Lately, among the blackbirds and robins gathering to migrate, there have been so many other sights and signs of the season change.  Woolly bear caterpillars have started to make their annual pilgrimage across the highway. I see them frequently, booking it across the road, some traveling east to west,  while other caterpillars  are equally determined to make that road trip west to east.

I don't know what makes the woolly bears cross the road.  In country lore, the woolly bear caterpillar's rust-to-black fuzzy band width is supposed to foretell the duration and quality (bitter or mild) of the coming winter.  I've been interested to measure their bands, and set about to do this on one of my trips to Bloomingdale.  I have an interest in measurements that I can record for use when I weave my Tapes Without (numerical) Measure (which are my attempt to measure nothing less than life as it is).

Measuring woolly bears turned out to be a more difficult task than I expected. As soon as I parked my bike, took out pencil and notebook, chased them down, held the paper in front of them, to crawl across, so I could mark the band width, they would curl up, and refuse to uncurl while I stood, waiting.  Of course, it was likely,  that my uncooperative curled up subject would disappear under the tires of local traffic before I could even make my record.  (I'm happy to report, all of my subjects survived).

After a setback of a broken pencil lead, and a trip back home to replace it, I was able to collect 13 measurements, last Sunday.  Eleven of my subjects  had very similar width bands, black head band, rust mid-sections, and black tail bands shorter than the head end.  Two outliers: one caterpillar was all rust, and one all black, so cancelled each other out.  It was a small sample, but I was satisfied.

I don't know what to make of the woolly bear measures with regard to the severity of the coming winter, but they are consistent.  I know I will make a new set of Tapes Without Measure, with woolly bears included, and also add them to my Key of other Vital Measures, which now includes my cat Mikey's long tail, my own true waist measure, and 5 minutes of Darrel's dog barking across the river at midnight, in mid-July, when I wove one blue weft thread into my tape each time the dog randomly woofed.  Literally, warp and woof.  The warp is time, as usual.

In the old cautionary tale of the ant and the grasshopper, I am  a true grasshopper when it comes to preparing for winter.  But looking at that little code of blue threads on a future winter day, will recreate that warm and muggy, soft, summer night when I listened to Darrel's dog barking and wove.

Susan -
I look forward to reading your posts. Thank you for sharing your "commute" to your studio. I so enjoyed reading it, and it's always a treat to see what you've been working on. Beautiful words and images.
Laurie

I look forward to your posts, and this one was one of the best.
so wonderful, the measurements, biking and noticing.
weaving color to capture sound.
You are a remarkable writer and I thank you.

Now in addition to being my artistic endeavors inspirational wonder you have become my inspiration for all things CONSISTENT OUTSIDE EXERCISE! And you can write, weave, cook, oh my. a great post from a good friend. I am lucky. Thank you.

Now THAT sounds like the best commute ever!! Thanks so much for sharing. You are an inspiration to this fledgling weaver..

Woolly bears? Really? I had quite a good laugh about that.

It's rather unlikely that I'll hop over from Iceland to your beautiful corner of the world to visit your store, so I keep an eye on your Etsy-shop. Unfortunately I seem to miss new weaves every time...

Laurie, Thank you, again, for indulging me.

Colleen, I entertain myself, at least! Thanks for reading.

Judith, I feel like an athlete, some days! I'm sure it's mostly
my overly active imagination. Lucky to be friends with you.

Leigh, oh good. Don't stop weaving. It can be a lifelong way to work as an artist, and there are so many unexplored paths

Cristina, Oh Iceland, beautiful and strange! I visited once, and envy anyone who is lucky enough to live there.
Sorry for my scarce scarfs. I do weave steadily, and will be listing my new winter scarf batch (with alpaca, cashmere and merino yarns ) in mid-October.
I should mention it in my blog. I do announce it on my Instagram at Avalanche Looms.

P.S. You know, it's all spelled out in the Dickeyville Grotto
words to live by: Joy, Charity, Goodness, Benignity, Continency,
and Modesty. (Modesty is the hard one for me.) Benignity
is my favorite concept, and a good word, to boot

I have enjoyed your story-telling, but of course your words have raised some thoughts....why do the woolly bears bother to cross the road? And why some direction and others in another direction? And where did the country lore start that the width of their bands dictate whether the winter is going to be mild or harsh? The wonders of Mother Nature!

Jenny M, I have no idea what makes them crawl across the road. They must be searching for a good place to spend the winter.
Where the idea began is also a mystery, though people have always looked for signs and omens to foretell the futures, more black on the W-B than orange is supposed to be a harsh, long winter. A larger area of rust indicates a mild winter. That's what it looks like we can expect this year

I'm in Wisconsin too, and just this morning we were talking about the wooly bears. My uneducated guess is this is going to be a milder winter...the bands seem smaller than I remembered from previous frigid winters. I can only hope so! I too need to exercise more. We just moved last week. I need to find a no excuse path around our property and the neighboring farms. Beautiful pictures, your weaving so are beautiful.

Anita, thanks for reading, and welcome to WI. I take pictures to see what I'm actually looking at. I'm so glad when they are interesting to others, too. I looked at your blog, and see you are a photographer, too. Your photographs are inspiring

Your photos are gorgeous, as always! I seee that autumn is coming to your part of the world as well.

I love the randomness of that woofing and weaving...all a part of a larger design--just beautiful.

Dawn, thank you. I can't resist word play: warp and woof, dog woofs...
My business name, Avalanche Looms. I'm amused by the image it brings to mind of a catastrophe about to happen.

You are ahhh-mazing in so many ways!!! I enjoy my visits and look forward to more of your 'adventures & anecdotes!! I think I shall measure a few Michigan woolly bear caterpillars... as I am hoping for a milder winter!!

Inspired writing, I'm glad I read this. Woolly band width officially noted, now we will finally know if the width of it has anything to do with winter. Fall is staying long and warm and I still haven't gotten my bike to Avalanche to ride with you, but I share your love of riding my bike.

Great to see you in Avalanche last weekend, Susan. Here is the woolly bear poem/riddle from one of my former students...

"Among the grasses,
a tiny sweater.
His collegiate stripes,
forecast the weather.
Alas, the cold has gotten him too!
Our fingers freeze in November dew."

Jenny, now I've learned there are 15 (?) segments on the body, of the W-B caterpillar
& I ought to have been counting. Isn't that how it always goes, the more i notice something the more i have to notice how little I actually know about it, and how easily I spread. My ignorance. Be observant! Don't believe what your read here, but do take a walk with your eyes open.

Kathy, I'm still riding. Today is 50 degrees, sunny & dry, but my biking days are numbered. Then it's back to two-legging, clump, clump, clumping up the road. I am sure that exercise and fresh air contribute to health and happiness. I always have to remind myself of this.

Susan, oh, thank you, that's adorable! Little collegiate striped sweaters.
It was such a treat to see you again & consider the bumble bees and all things related