a good day to wash rugs 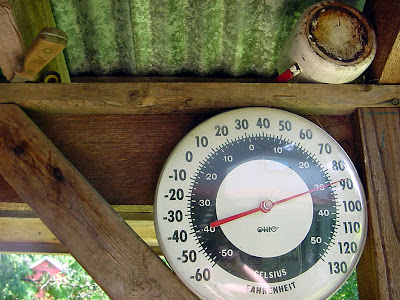 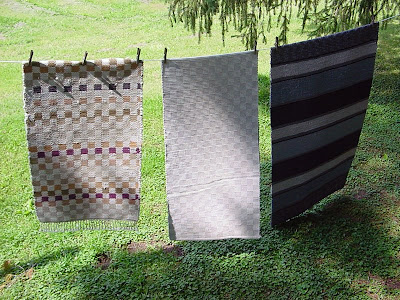 Doublebinding rug, plastic and velvet, I wove over 15 years ago, a linen check repp runner from IKEA, and a wool rug woven by my mother, take the air. 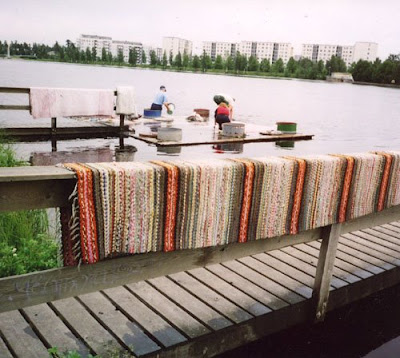 Rug washing by the river in Oulu, Finland, 2005. The striped Finnish runner has been scrubbed and hung over the rail to drip for awhile. 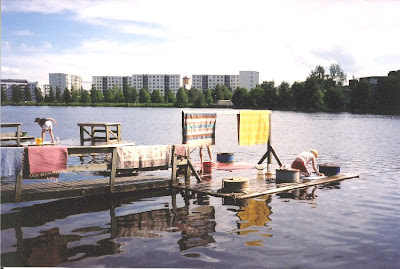 Rug washers on the specially designated rug washing docks in the river in Oulu, Finland, 2005. 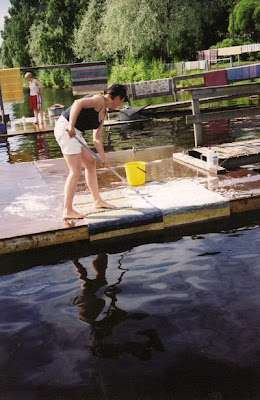 Woman scrubbing her rug with a long handled scrub brush. 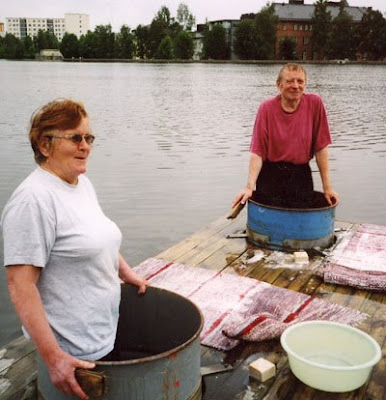 This couple were washing rugs standing down in barrels. The square bar of soap is a special rug washing soap sold in many stores.

Today I'm washing and hanging my rugs out to dry. It's finally a good, warm wind, and the rugs surely need it. I'm also thinking how I might enjoy looking back at these pictures, when February rolls around again, and the snow is deep, and the thermometer is less generous.

In 2005, my mother, Irene Johnson, and I went on a train trip through Finland, visiting her family in the towns along the way. It was a wonderful adventure for the two of us, and we soon found that in every town there was a station set up for rug washing. I took the rug washing pictures shown here in Oulu.

It was an idyllic day, and the people washing the rugs were having a nice time. My mother asked the woman why she was standing down in that barrel (my mother speaks an approximation of Finnish remembered from her childhood in N. Minnesota) and the woman answered, "Well, so I don't fall in the river!"

It was like a rug show by the water, and we were amazed. In other towns we found rug washing stations by rivers, but they were connected to the town sanitary systems, since the Finns are very eco-conscious, and are phasing out the places where people wash rugs directly in the river.
Posted by Avalanche Looms / Susan Johnson at 3:21 PM

I'll bite: how do they wash their rugs?

Oh, sorry. They spread them out on the dock and scrub them hard with special scrubbing brushes and bar soap for washing rugs. Standing down in the barrel allows them to scrub at waist height, instead of stooping over (and risking a fall into the river).

I love seeing how people in other places create and care for their textiles.

Your blog is a joy to read.

In Summer of 1973 I took a trip to Scandinavia, and when the ship I was nearing Helsinki, I saw this same thing, long piers, people standing in barrels, washing their rugs. Fascinating!

Blossom Merz, I'm glad if you enjoy the things I show here

Janice Zindel, Most of the towns had these facilities, and they were always in use. Most of them were near the river, but with drainage connected to the town sewers. There were big stainless scrubbing tables and draining sinks, and hand cranked, wide rug wringers.

this is a great post. especially since i need to wash my rugs!

Jude, Thanks. It's a small job that feels like a significant accomplishment.

Your three rugs are beautiful, firstly.

Secondly, I love love this post! Having a lot of Norwegian blood in me, Scandinavian textiles are so very interesting for me. And I love things like this; little cultural idiosyncrasies. You wouldn't really see something like this in America, where progress is pushed from every angle. But somewhere old like Finland, they still have their wonderful traditions, like elbow grease.

So, will there be a dock and a barrel on the West Fork at Avalanche?
- ev

ah, like so much that comes from scandinavia this is beautiful, simple and wonderfully functional. i wish i had a rug washing dock... or a yard with a clothesline. thanks for the vicarious pleasure