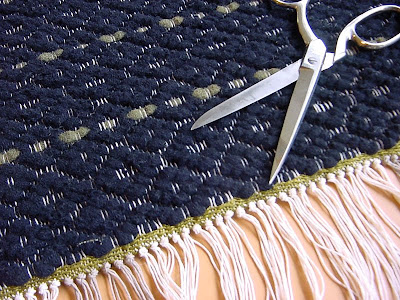 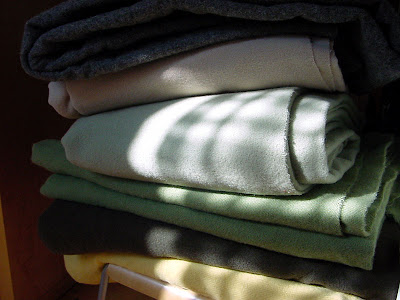 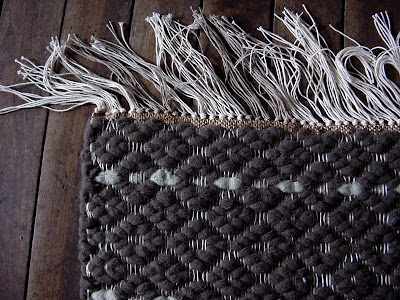 A new order of blanket wool arrived: large soft pieces of gray, gray-blue, mushroom, basil green, soft yellow, and a beautiful bark-gray-brown. The sun lit up the stack, and I don't know which ones to start weaving first. My own rule on my Winter Rugs is to weave just 2 colors in one rug. I'm very tempted to put all of the colors in one long, long rug. I'd like to see that, I know. But I'm going to try to resist it, and attempt to stick to my plan.

I finished a brown and gray-blue rug, dampened it, and dried it in the dryer. The lint trap caught a lot of wool fiber. When I shake it outside in the sunlight, there's no lint. It shrank from 50" when it came off the loom to 45", and became heavy, soft and drapable. I love the heft of these rugs after they're finished. I put this one by my bed last night, to experience the feeling of stepping out on it in the early morning. My husband must think I'm nutty, but he doesn't say so.
Posted by Avalanche Looms / Susan Johnson at 11:51 PM

Lovely! My boyfriend thinks I'm nutty and says so! I would've done the exact same thing. What's the point in handweaving a beautiful, tactile, textural, fluffy rug if you're not going to put it right next to your bed and put your feet on it in the morning?

Ask him that! Haha.