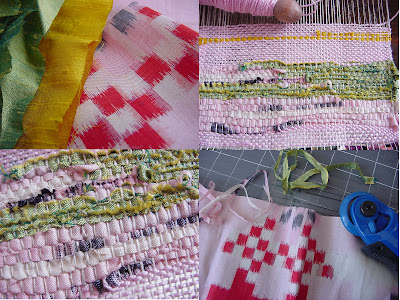 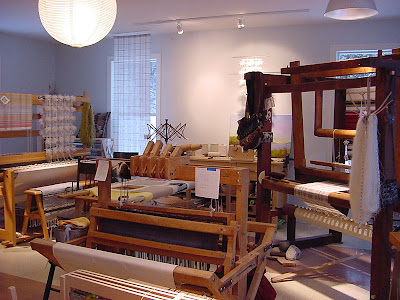 I weave rugs made of rags. I am one among the class of rag weavers past and present, weaving humble rags on basement looms, under single bare bulbs, among stacks of old newspapers, and too many cats. The wind whistles across a bleak midwestern prairie. In front of the house, a handpainted scrap wood sign with the words Rug Weaver dangles from a fence wire.

Not that I aspired to this when I began to weave. With my barn loom, and a studio with a view, I was a handweaver. Never troubled by low self esteem, I was doing no less than designing and creating contemporary textiles.

My heroes were, and still are: Anni Albers, Pia Wallen, Marta Maas-Fjetterstrom, Ann Sutton, Reiko Sudo. But my other heroes were the anonymous rural basement and shed weavers, weaving the rugs like the ones my mother put on the floors in our house. Rugs I studied closely, cheek pressed to the weave on the floor, counting threads, trying to imagine how everything became so organized. I'd never even seen a loom then. I carried a rolled up rag rug to keep in my cubby for naps on my first day of kindergarten.

Weaving rags for me is most like making a painting. I weave by eye, and am prepared to unweave. I know from my own experience that rag weaving with all its variable elements can quickly become a bad thing. I've practiced noticing this sooner rather than later in the years I've been weaving. It is a fact that some of my lesser 'lesser works' (the odd throw rug) have found use only as garden mulch. But, truly there are times, and many of them, when what happens on the loom between the beater and the front beam is pure delight. When a least moment of ecstasy causes me to skip a little dance, and sing a little song, disturbing the cat.
Posted by Avalanche Looms / Susan Johnson at 11:03 AM

I am going to aspire to be this rag weaver. It sounds fun, unpretentious, free and inspiring. Rags to riches, or at least rags to a utilitarian, useful and often times beautiful piece of a home. Or garden mulch, but we all need something to keep us humble from time to time.

I love this post, Susan. Your writing really shines. Hopefully, I can weave as diligently and as determinedly as you do. As beautifully, too!

LOVE LOVE LOVE the top photo. It's so... spring-y!

Would you tell in your blog how you came about owning your barn loom? What you had to do to it as far as repair or any other information. I recently purchase one.

Happy Belated Birthday Susan! Alex is a pisces, too (3/6). I baked him a from scratch german chocolate cake- it was way tall but delish. Hope your special day was a good 'un!

Debbie, Thanks for the birthday greeting. What's a birthday for but an excuse to make a great cake? Yours sounds fabulous. I wish I could see it on your blog....

Anon. I'd love to talk about my old loom. Congratulations on getting yours

Meg, I've been reading your blog so often, especially your posts about what, why and who we weave for
Thanks for feeling the spring in my silk&cotton rag weave