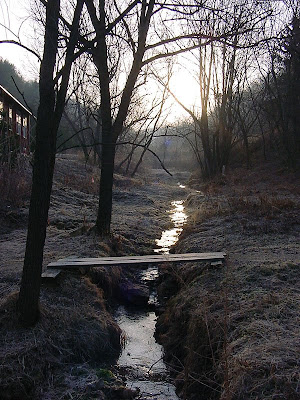 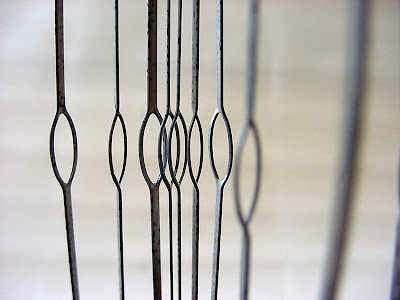 I wanted to wake up early enough to take a picture of the earliest sunrise we see here in the valley. It happens on the first day of spring, when the sun rises almost directly in the east, at the bottom of the V formed by the two hills. Technically, the sun had already risen a bit, by the time I had opened my eyes and found my camera. But, it's a very-close-to-sunrise picture. And, technically, officially, it is spring again.

The heddle eyes are what I'll be looking through for most of the rest of the day, threading linen for window weaves on my old Norwegian barn loom. Plain weave, spaced warp, unbleached and half-bleached. My favorite flavors!
Posted by Avalanche Looms / Susan Johnson at 11:45 AM

a little rhyme, inspired by my dog

thanks goodness for spring. i sometime's lose faith in the turning of the seasons come february.

Hello Susan
I love your blog! it has such beautifull pictures, I most of all love the rugs you make from old woolen blankets. Is it possible to tell how you do this? I assume you first cut them up and are you sewing those strips together than? or just overlap in the loom? and what do you use for warp? I hope you want to answer my question. I am new to ragweaving and here in the Netherlands I can't seem to find much information about it
thanks in advance
Giny

Beautiful sunrise, Susan. What a wonderful day to have! I can't wait to see what you're doing with all of those perfect combinations!

humblebumble: you are so energetic! & your poem is a delight

Giny: Ooooh! So exciting. A new ragweaver! I think I'll write another post about weaving rags in hope of inspiring you

Hello Susan,
I am really looking forward to that!
greetings from a sunny , Netherlands
Giny

I've always liked heddle eyes. Maybe because I never had to spend much time threading them.

Those cool and limpid Heddle Eyes

Or was it Green Eyes? "It seems to me I've heard that song before"