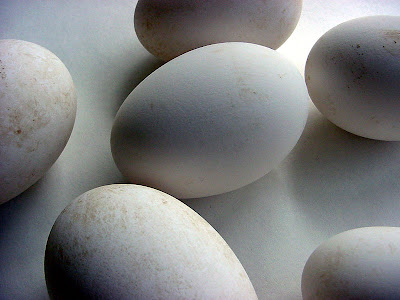 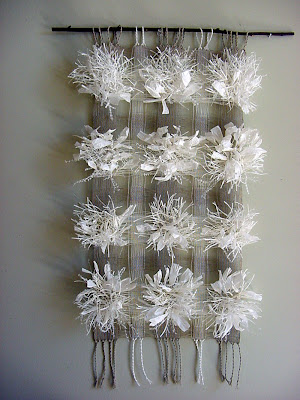 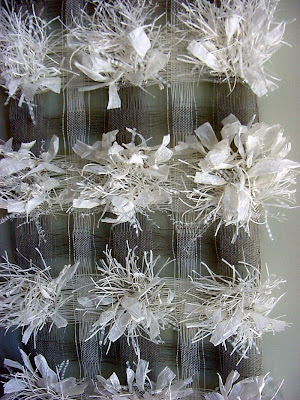 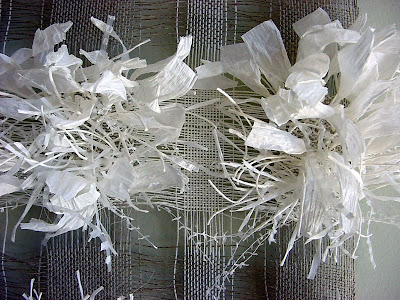 I'm back at my barn loom, working on a similar piece to the first All My Eggs in One Basket, made in 2007. After all, it's spring, and definitely laying season. Weaving this transparency I used many different yarns, silk ribbon, unwoven plastic tarp, Finnish paper yarn, Japanese paper and silk yarn, wool, and linen, in the rya sections. Each section contains over 100 knots, with multiple strands bundled in each knot. Linen transparency weaving is a traditional Finnish weave, as is rya. The predominant yarn, after linen, is Finnish paper yarn I first bought on a trip to Finland in 2004, with my mother, Irene Johnson, also a weaver, who lives in Ely, Minnesota.

At the time I saw many contemporary weavers in Sweden and Finland using it, and I was already familiar with Hanna Korvela's brushy paper yarn designs using paper in rya knots.

On our trip, my mother and I visited a restored block of workers' residences in Tampere, Finland, which provided housing for workers at the Finlayson cotton mill in Tampere.
The houses were open to tour, and we saw an apartment similar to where my mother's mother,
Impi Sofia had lived with her sisters, while she worked at the mill.

These were civil war years in Finland, and my grandmother was known to have tried to throw bread to her starving brother, held captive in what our family describes as a large, empty molasses vat. Other brothers in her family had been shot and killed, including a 14 year old brother acting as a messenger. The story is vague, but her own life was in danger for trying to help her brother. For her safety, her sisters and family friends gathered money for her ticket to the United States. She left Finland suddenly. We were able to speak to her youngest sister, who was still alive, and remembered the terribly sad day when they were packing her trunk to leave. My grandmother never saw her sisters or Finland again. She was 17 years old.

All My Eggs in One Basket celebrates and commemorates her escape, and the result that my mother was born, and, so, I was born. These are strands that connect me to her life, and her experience. When my grandmother left Finland to come to the US, she put all of her eggs in one basket. It may be that she had few good choices, but I think it was an act of great courage.

All My Eggs is about taking the risk and sticking your neck out, not holding back for fear of losing. To choose to work as an artist calls for putting your skills, and insubstantial ideas out and claiming them, in public. No one shows up to say you're not allowed to do this.

The "eggs" in my baskets are partly made of the Finnish paper yarn produced there in Tampere.
By unwinding some of the tightly twisted paper yarn, these eggs "bloom". To me they are blooms and eggs, imagination and creative potential.

Though conventional wisdom discourages the idea of risking all, I take the opposite view.
To create anything new and of value to the future often requires that you put everything you've got into the basket, and maybe a little more than that.
Posted by Avalanche Looms / Susan Johnson at 9:40 AM

Amen! Dave tells Rikkianne and me not to get our hopes up, but I say that I don't mind because if you get let down you just get up and keep going some way or another. I like putting all my eggs in one basket. I do not like to eat them, however. They look much better in your weaves anyway.

You should try to eat more eggs--they are an excellent source of choline!

Beautiful weaving and a story to match. Thank you so much for sharing the inspiration for the art.

Thanks for reading it!

These are among my favorite of your weavings, and of any weavings in general!

On another note, perhaps I've always lived with all my eggs in one basket, unknowingly. I think, however, my basket is so huge, as is my unrestricted vision, it has not seemed too risky. Though I would venture to say it is sometimes frustrating wandering within that space among so many 'eggs'.

Susan, I'm looking for a loom like the one you have on Flicker. Do you sell them? Please contact me.
Thanks, Cherri Hankins
maidensweaver at earthlink dot net

Cherri, I do have a barn loom, all the pieces here, but still need some repairs, too. I hope to sell it locally this summer, it's really too big to ship

a moving story and inspiring message. this series of weavings is one of my favorite works you have made, powerful and delicate at the same time.

Wow -- what a beautiful weaving! It looks like you managed to weave chrysanthemums into the cloth. Amazing...thank you for sharing this with us all.

Well, thank you so much!