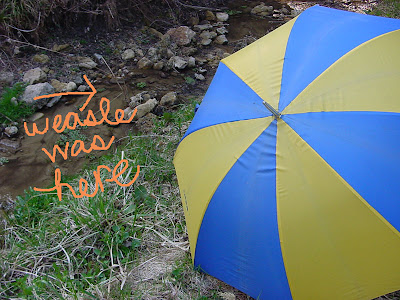 Coming out the back door of the store, headed for the house, I crossed the creek on the 2 board foot bridge. I had bread in the oven, probably overbaking. On the path down to the creek I began to hear a terrible screeching noise ahead, coming from the yard by the kitchen. Maybe the cat had caught a spring bunny that was making this terrible cry? But no. I realized it was much closer than that. It was under my feet, in the creek. It was a brown animal sitting on a rock beneath the foot bridge, with some water on its fur. It was looking at me, and shrieking. I wondered if the cat had dragged it into the creek. But it was as big as the cat, and it looked mean. I stopped in my tracks, then backed up, went back to the store, and googled weasel.

There it was. A longtailed weasel, of the kind that lives in many places all over the North American continent. It especially likes watery places. It was about 16" long, tan colored, with a humpy back. It had a scraggly tail that was about 6" long, it would make a loud chirping noise when it was frightened, or when it was about to attack.

We have never seen a weasel in broad daylight in all the years I've lived here. I decided to go back to take its picture. I also took my blue and yellow IKEA umbrella, as a weapon, in case of "attack." As soon as I opened my back door the screeching sound (chirp?) started up again. As I approached the path, it turned to get me in its sights, apparently deciding which part of me to latch onto with its teeth (which I now noticed). Getting the weasel to pose for a picture seemed like a really bad idea. I rapidly opened and shut the blue and yellow umbrella, to demonstrate I was not going to be an easy victim. This only seemed to infuriate it. I decided to call it a draw, and walked to my kitchen by the long way around on the road.

Round and round the mulberry bush, the monkey chased the weasel / The monkey thought was all in fun / Pop! goes the weasel! A very sinister sounding nursery rhyme, when you think of it. What about Toad Hall in the Wind In The Willows, overtaken by the terrible rabble of low-life stoats and WEASELS!

The weaving-knitter-felters and chicken-keepers I consulted at Kindred Threads had weasel lore aplenty to share. Barb said weasels in winter are ermine. That's the best that can be said. Mostly the weasel story is gory, their particular way of death dealing--biting the heads off of chickens-- returning again and again to do the deed, entering through the tiniest crack in a board, until finally, there are no more chickens. Their advice was to shoot it, and quick.

Luckily, I keep no poultry of any kind, and since FeltBackie died last winter, I've got just one cat. So I avoided the creek for the rest of the afternoon. Eventually, my weasel seems to have lost interest here, and wandered back down the creek. I admit while crossing the bridge near midnight, under the stars, as I go back to my house, and bed, I remember my weasel is still out there somewhere, maybe waiting under the bridge to fly up under my feet--POP!
Posted by Avalanche Looms / Susan Johnson at 2:46 PM

I am happy that you made it out of the situation alive!

I was always told the the term "pop goes the weasel" was referring the clicking of a clock reel as yarn was being measured. Because the reel was called a spinner's weasel. See http://en.wikipedia.org/wiki/Spinners_weasel

Never the less...not a critter I'd be tangling with. The umbrella was a great idea. We have a coyote hanging around our area...and it's suburban Detroit for heaven's sake!

Ursula, but I am nervous.
Valerie, But why was the clock reel named after the weasel? I think because nothing snaps you to attention so quick as a little weasel action

so just don't send him to Dell-Barb

Barb, it seems like a weasel is hard to persuade, but I just remembered you said a weasel is an ermine in winter...wouldn't you love some ermine trimming on those beautiful sweaters?

He was frozen stiff in the back of our freezer, but if he had thawed....who knows? By the by, have you heard of the Sausage Wars in Finland in 1939?

Thank you for your message! I really doubted, whether my English summary would attract any new visitors. Your blog is truly beautiful. I was impressed by your works and will visit your blog again.

Have a nice week!