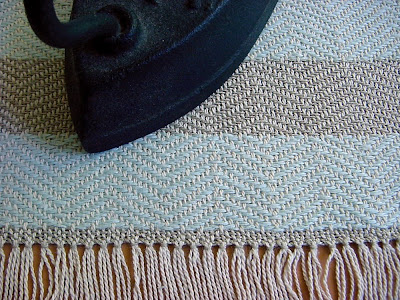 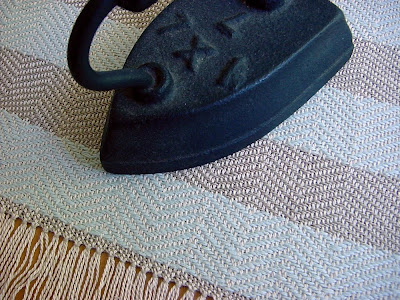 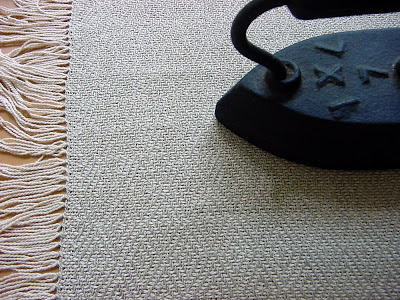 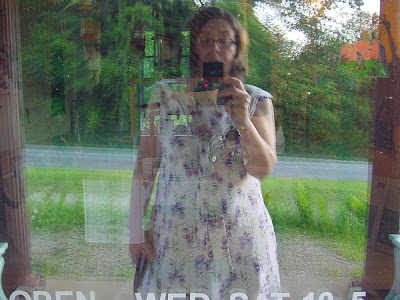 That would be me.  Only instead of a sleekstone or a pebble, I have an antique sad iron.

I wove two towels on a long staple ivory cotton blanket warp, with linen wefts.  After I cut them off the loom, I washed them in warm, soapy water,  rinsed them, and hung them to dry.  When they were dried, I used my antique sad irons to "smooth" the linen, instead of a cold mangle, which I have none.

The towel was laid out on my wood shop table, and I used the cold iron warp wise, working across the towel, then turning it over and working the iron in  long strokes across the back, as well.  I  did this for about 15 minutes.  It looked good then.  I also dragged the iron weft wise, and that seemed to work, too.

It was exciting to see the coarse weave became so lustrous, and smooth, and the Goose-eye design more prominent. The drape of the towel over my arm made me want to carry it with me everywhere, even to accost my husband enthusiastically with the towels,  to feel the cool drape.   I'd read about the technique a while ago in Vav (the Swedish weaving magazine) but forgot about it until now.  The smoothed linen drapes, and though it folds, it doesn't crease, and the smoothing process was not too strenuous a workout.  A linen smoothing board (made of a whalebone)  and a glass smoother were found among an exhumed Viking woman's burial items, dating back over 1000 years.
Posted by Avalanche Looms / Susan Johnson at 8:35 PM

Thank you for your kind words at my blog. I see you have fringes at your towels, never thought of that, it looks nice though. Are they kitchentowels and aren't the finges a problem when using them? A lot of questions I know. I do like the colours you used and the way you used the iron! :-)

Such an interesting technique and beautiful work.

DEEP END OF THE LOOM said...

Very interesting technique I thought you had to heat the iron to get it to smooth the linen out. The towel pics are lovely.

Marion. The towels might be kitchen towels or a wash towel. Not big enough to wrap your hair. I wanted the fringes because I like the look of the hemstitch at the ends. I don't see it as a problem for dish-doing or drying hands and face. Towels are fun to make

Hilary and Novembergrass, Thank you!

Deep End, Heat is not so good with linen. Odd when I think of the hottest setting listed on my electric iron: Linen

What a great technique. Linen always looks and feels so lovely when well pressed. I've heard you can get a similar effect by using a large round dowl, wrapping the woven linen around it and rolling it on a wooden table. Whew, what a lot of work!

This smoothing (according to the VAV article) was in place of cold mangling, which is the recommended way to finish linen. The Scandinavians used straight wooden pins to wrap the cloth around, and a flat board with a shaped handle that look like a horse. Might be a lot of work, but this smoothing wasn't

Lovely, lovely post. And LOVELY towels! Such beauty in all that you do! (And thank you for your recent visit and comment.)

The techniques used by our fore-mothers are so inspiring. Fascinating history and beautiful weaving!

this is an interesting method. is it useful for ramie and other cellulose fibers do you think?