A Death and a Chase 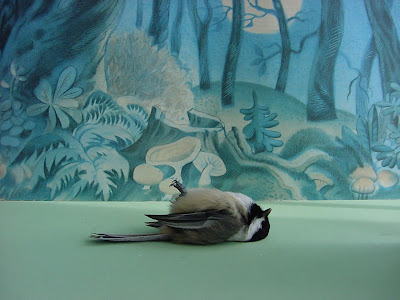 First there was a death. This chickadee flew off the feeder, straight into the workshop window.  It fell to the snowbank below, twitched its feet, then gave up the ghost.  Its breast feathers were lemony, and gray.  A color I hadn't been able to see before.  Its small feet, blue.  Poor thing!

Next thing, a  rabbit came straight down the path to the house, in the middle of the day.  I noticed him, because usually the rabbits stay hid in the brush of the tree row during the day.  And, this one seemed to be in a hurry.

When I was back at the loom again, well, actually at the window near the loom,  trying to get a count of all the cardinals perched in the tree above the bird feeder (16 was the most I counted, but they kept moving. so I'm not sure) here came the same rabbit.  Bounding over the deeply snowed bank on the other side of the creek,  it crossed a rough row of snow covered creek rocks, and then came up the path behind the store.

The rabbit didn't  even glance at the black sunflower seeds scattered on the ground around the feeder, but hurried by in determined haste.  I took another count of the red birds, mainly because they were such a treat to look at in all the snow, plump and red, perched,  like fruits  on the gray branches.

What's this?  Something moving,  gray and slinky at the top of the hill across the creek, just where the rabbit came down through the snow, making its own trail.  It's the weasel!  The same from last summer that wouldn't let me cross the bridge to the house?  Or an associate?  The gray furred  weasel undulated, body surfing through the snow, more than it used its legs, which were not long.  And it was fast, following the rabbit's trail as far as the creek stones, then doubling back. It was back at the top of the bank, in  a moment,  in one gliding,  cursive stroke.

The weasel looked small, only about  2/3 the rabbit's size, but was definitely in pursuit.  Back to the rocks, the weasel streaked across, not getting wet, though weasels are aquatic.  Soon he was up by the bird feeder, hesitating going first to the west, then toward me at the window, then going  around the east side of my building. The rabbit had gone west, but was only a few minutes ahead.  The weasel's gray, fine fur looked so soft and silky, and its face sleek and beautiful. But, oh my, what a mouth full of teeth are in that head!  I thought weasels turned white in winter, but not this one.

I took my camera and sneaked out the front door hoping to see more, but there was just a shadow of
a gray tail (?) sliding under the gas pig in the side yard.  I had disrupted  the chase, but my feeling is that the weasel still had the advantage.  Another unresolved story, with life and death consequences, unfolding outside my window. 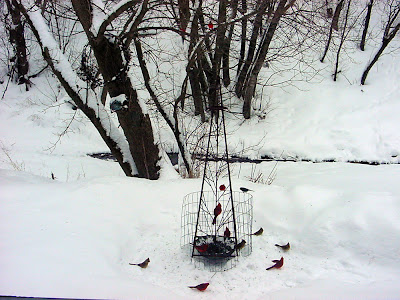 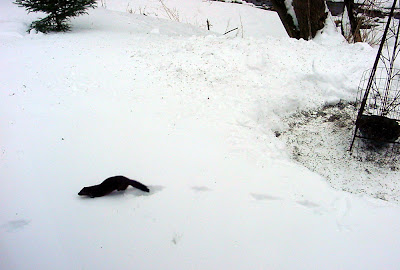 What actually came next is I went back to my weaving, wondering how, exactly, a rabbit's expression can appear anxious, and how is a person supposed to get anything done around here, with all this drama?
Posted by Avalanche Looms / Susan Johnson at 1:40 PM

Susan, I just love your stories. Makes me want to look out the window and watch the world go by. :-)

You certainly gave the little chickadee a lovely setting for his last photograph. So sweet.

Hi Susan
Is there anyway you could put a little something on your window to warn any passing wildlife? A friend of mine has a narrow strip of gauzy material on the inside of her large window. It doesn't block the view, but it seems to do the trick. Haven't been any bird fatalities since it was put it up.

Your blog is such an inspiration. You weave and write beautifully.

I had a sweet chickadee hit the window lie there for 45 minutes before, under my watchful, prayerful eye, flying off. However, a few days later, another chickadee did not make it after the same bombardment. I put up a dark felt large bird shape on the window, though with the sunlight it did not show on the outside. Now I have a simple cut-out white paper bird, and nary a chickadee tries to fly in.

I have just sat and read through all your posts. I was entranced. The passing seasons, the beautiful photos and inspirational weaving. I will visit again, really lovely and you have fed my imagination.

the drama at your house is so much better than the teen drama at school! i had a short tailed weasel in my barn years ago, very small and in it's ermine coat. the little one was huge in fierceness, though. do you know barry lopez's crow and weasel?

I think I've been staring out the window a little too much these days... I do have reflective things to stop the birds hitting the glass, but from the bird feeder, the sky reflects. I know, I checked from their view.
It's hard even to see the linen tablecloth hanging there...

Who doesn't love to write? What's rare is to find someone who willingly reads.

We have that, but have not read it in a long time. I do love the animal tales& fables, Br'er Rabbit stories, in particular

Such drama. Puts me in mind of the day a duck chased my daughter around a cabin we had rented on vacation. Instead of saving her from getting honked in the butt, I ran for my camera. Bad mom. Great memory.

it's now Chinese New Year and the year of the Rabbit! Bet this means nothing to the weasel.....

Yes, Deb. I'd just become aware of everything I've been seeing about the "year of the rabbit" and thinking, "whatever." Is this a trend? Then, I go and write about a rabbit

WOW--ANOTHER WEASEL IN THE AREA--Keep it in Avalanche--my chickens have had enough!! I thought weasels turned white in the winter? Where did I get that from?

Drama, indeed! Hopefully I'll get out of this pavement soon and move a bit into the country. I miss the outdoor dramas and the passing of life around me. Squirrels and robins and the occasional rabbit are all good, but I miss the trees, the running, etc. It'll be good to get back to where I belong :)

I'm here for the first time today and I had such a good laugh.
It's so much fun how you tell your stories!
We had a lot of window drama over here with a flock of about 40 siskins in our tiny 50sqm garden.
But so often they bang against my window, lay there for half an hour, then shake the bones and are off.
Blows me away!