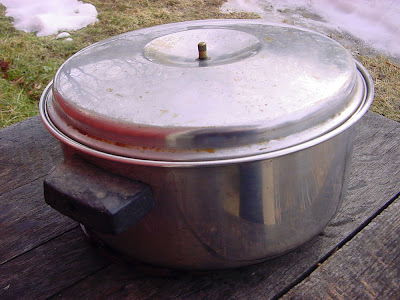 This is the pot I found in our old log house, missing handles, dusty, with a few dead lady bugs inside. I stepped outside and crashed the lid against the pot, like cymbals, and nearly deafened myself.
This is the humble pot I chose to take along with me to the hastily organized protest against our new Governor, Scott Walker's visit to La Crosse yesterday afternoon.  Barb (in-Dell) alerted me to the protest, and she brought her chicken feed pan, and a spoon to beat on it,  as well.  Here is my equation:  one woman with a cooking pot equals approximately 4 protesters without cooking pots.  The noise level is incredible.  I wish every one in that crowd of 500 had brought its cooking pot.
Scott Walker, the new, regressive Governor of the State of Wisconsin has been making decrees from what he must think of as his throne, since before he took office.  His latest, to end 50 years of collective bargaining for almost all state workers, teachers, school lunch ladies, etc. as well as benefit cuts, is more than most people can swallow.
Collective bargaining means that everyone has a say about what wages and concessions will be made.  Both sides agree on common goals, and work toward them.  It's a civil system that has worked very well for over 50 years.  Scott Walker says, There is nothing to negotiate, and besides that, he has decided that state employees aren't even going to be allowed to negotiate.  He said yesterday, that he was sorry, but there's nothing he can do.
I thought it was the other way around, that there's nothing he thinks he can't do.
Icelandic women dissatisfied with Parliament surrounded the building for days, beating on the sides of the building with cooking pots, until their demands were met.  This was years before the masses  of people persuaded Mubarak to depart Cairo.   The cooking pot idea is a marvel.  When you feel angry, bang some pots and pans.  My grandma did, and probably her grandma, and her grandma.
Posted by Avalanche Looms / Susan Johnson at 11:39 AM

Very good!
I once heard about a demonstration in Mexico where the women in town hung up nasty diapers on makeshift clotheslines to express upset. Another demo in South Africa where women filled cans with marbles and shook them mercilessly.
I like the kitchen pots because it also is used at New Years to ring in change.

You're very funny when you're angry!! I laughed about you deafening yourself by accident. You go girl!!

So if I go to Madison on Friday I really would like to take the dirty diapers--God what a sight it would be!!!!

We don't often hear of demonstrations like this over local issues from the US. Good luck. You are going through the same miserable narrow minded, selfish attitudes from politicians as we are here in the UK. There must be different and more equal ways of coping with hard times.Please keep banging those cooking pots!!!!

I love both the pot banging and the dirty diaper hanging. As an older woman, I do have ready access to pots, but not dirty diapers. I am going to pass both these ideas on...

I am with you! My hubby says we have the best government money can buy (think about it). I like to think of a chain of women around the world, banging pans for that 'government of the people, for the people'. We could form a conga line and bang our lids on our neighbors' pans. Yes!

deborahbee, Selfishness and greed are what I see driving this kind of politics. It makes me sick. I know how hard people work, and under what stress, women in particular, usually at the bottom of the heap. Banging pots felt good! Writing about it here in the hope that it might cause someone else to arrive at the same conclusion: I've had enough of this, too. And step out

There are lots of creative ways (dirty diapers) to stir it up! Mercilessly, I love that!

Saw Barb (in-dell) this morning said you were in the newspaper! There was a sign in one of the pictures she had -- something like 'Scott Walker the dick - tater' says it all.

I remember my grandmother making a bee-line for the kitchen when she got angry. The pot-banging and muttered curses left quite an impression.

I am so happy that you are participating in these protests. Banging pots and pans must be such a statement, too! The same ideas are being spread, or enforced, it's hard to tell which, here in Michigan.

My fiance's dad words for the school system, has for maybe 30 years, and he seriously thinks he may lose his job. He'll get a terrible pension, not enough to live on. He'll be replaced by a younger person who will have to work for probably less than half what my father-in-law makes. It's sick and it's greedy and it has got to stop. We're just all hoping that he keeps his job.

Susan! I love this. You make me proud to be from Wisconsin despite all of the despicable news coming from there. Keep up the good work. Damn straight!

all around the world it seems time to bang the pots.
Huuuh, I alread suffer from Tinnitus...

I'm glad you protested! Now the federal government wants to cut $500 million dollars from a program that feeds poor women and children? We should riot in the streets - but we won't.
Nancy