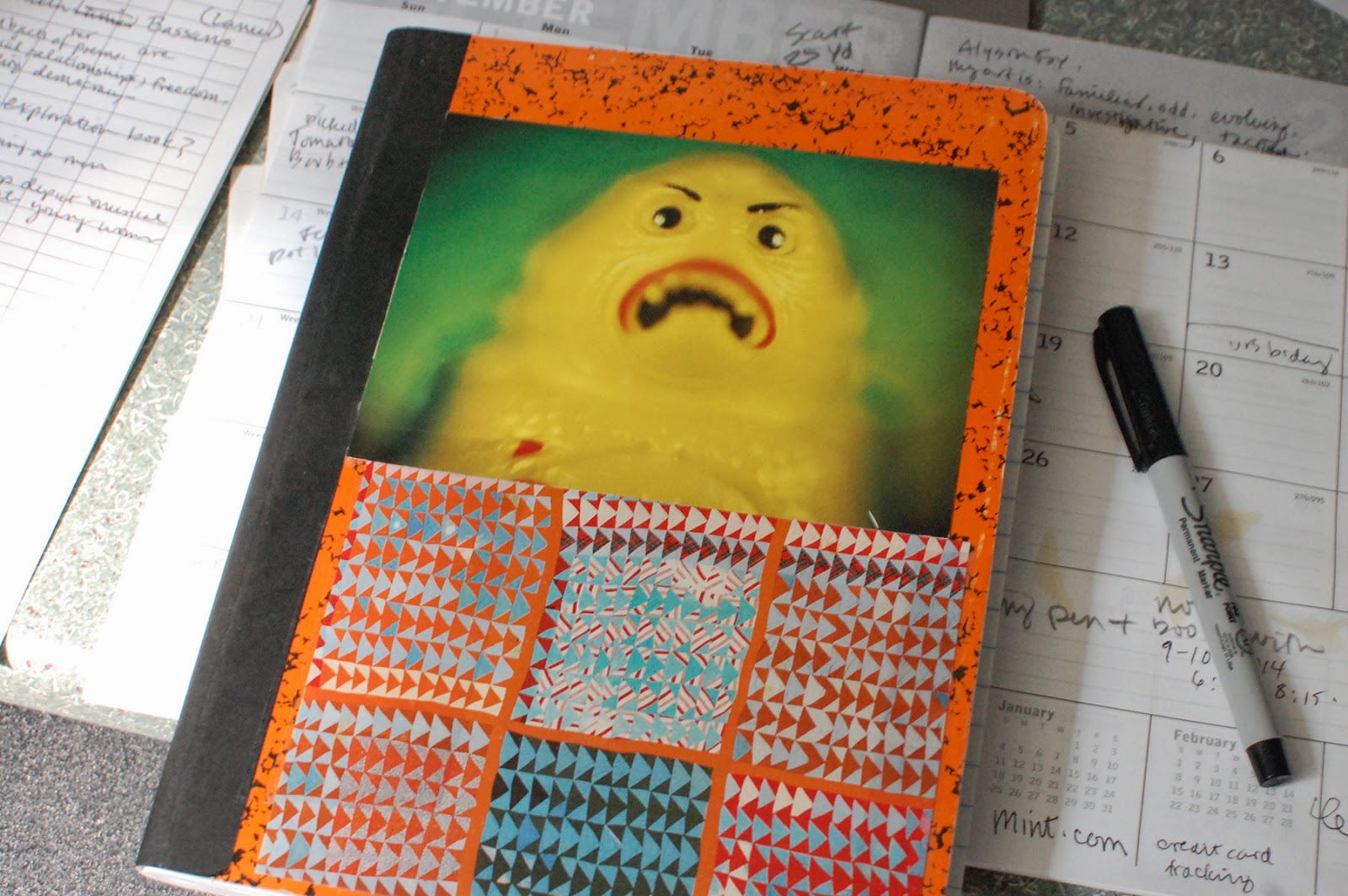 When opportunity comes knocking, I usually shut off the lights and pretend I'm not home.
But this time I signed up for the writers' workshop.  The first workshop I've taken, except for a felted slippers workshop, in which I successfully crafted a pair of serviceable felt slippers. This success may have been the source of my confidence to write the check. Do I want to write? Yes, I do, and I would like to write better. I'm excited with anticipation.  We are given a list of supplies. I love to buy supplies! I buy a new notebook, with college spaced blue-lined paper.

In my first fiction writing class there are 12 writers writing, including two teenagers, two men,  and mostly people I know already.  I hear the instructor promise that no one must read what she has written aloud. We will be given a topic, and a time limit in which to write about it, using a technique called "free writing" in which nothing matters but to keep the pen on the paper,  pushing on even in the absence of an idea.  We are learning to access our creativity, without judgement. My first idea is that I'll not touch my pen to the paper until I have an idea, technically adhering to the rule of not stopping once I start.  We're given our subject:  an old worn object.

The story of my life! There's so much I could say. I gaze into the distance of the middle of the floor of the room where we are assembled at desks.  When was I last seated at a desk?  Every writer is writing furiously now. (I didn't expect the writing workshop to feel competitive). But, I'm going to wait until something comes to mind, as it surely will, so I may set my pen to paper and begin.

Next to me, a bright young woman, a dazzling and accomplished writer I have known and admired for several years, is already writing to the bottom of her first page.  She has a very fine pen, I notice, with very slippery, fast ink.  I wonder where she bought it.  I know myself, and though the time must be already half over, I am not concerned. But, no. The time is actually over, and we are told to stop.  Desperately I look into the inside of the front of my forehead. Two words swim up from the gravy murk, like a Magic-8 ball. I scribble them.

Now the vibrant writing woman next to me volunteers to read what she's written. "I'm not shy," she says.  Her piece starts with a small, worn fragment of cloth, a fragment of an old worn story, a child's blanket, a color,  rose, a bit of cashmere, a mystery memory, that ends half way down page 2 with a sentence that pulls at my heart. It is a beautiful piece about a bit of textile, which sounds beautiful but, after a while, I honestly can't hear a word of what she's reading.  I look down at my own paper, on which I've written, interestingly, two words:  tuna fish.  I don't share.

7 more writing classes. If I can last.

From this first class, you've given us this wonderful story, even though you didn't write in the class.

I love you Susan!! your #1 fan in Chicago, patti rasmussen

I love tuna fish. And I love that you wrote it.
You go.

You pulled me into that workshop with you. I love this story, and can SOOO relate to it. I always worry about being the worst in any class or new group learning project, and it always dilutes the power of the experience. This piece was wonderful. Thanks for taking us along, and enjoy the next classes.

i love you
i love the way you described this first class
it's a great story
and tuna fish a fine start
;^)))

I find myself so curious about how this will playout.....such a good start! I keep wondering....will you read this fantastic blog piece aloud in class?

Thank you, my kind friends, for your words of encouragement, but the truth is I did not do well, and it was a poor start. The world will not be worse if I don't write fiction.

Judith. It's almost Wednesday again. Honestly, I'm terrified. Maybe that's better than being too sure of myself,

I love it, and I agree with Susan, from those two small words you've given us a great story. I hope you keep at it. Not for competition's sake, not for the class, but for you.

A big smile here. Love that essay, no matter what you call it. Fiction? Nonfiction? Who cares. You made a connection, and it has a shape.

Maybe the trick is to forget your attending class, just think that you are writing a blog post.
Good luck!

I think tuna fish are great words to start a story :)

you may have just completed the assignment. in fact, you did.

Haha.Velma. not by any stretch of my imagination! But thanks for trying to make it not a fail.

Alessandra, no it is not a good start, or a good end, for that matter, to a story. But I appreciate your trying to make it so, for my self esteem. My self esteem is a little bit too healthy, so no worries

I love tuna fish myself, and just can't get enough. No, seriously, your blog is such a joy and your voice gets right to the middle of things, the exact center. And the edges, too...