Tales of Ramps and Gentlemen's Pants 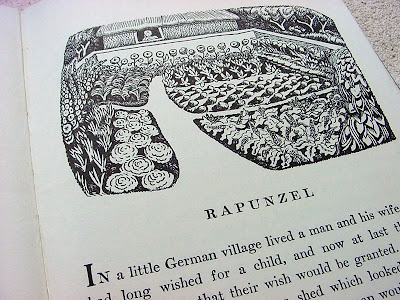 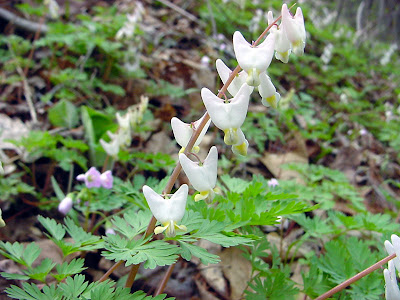 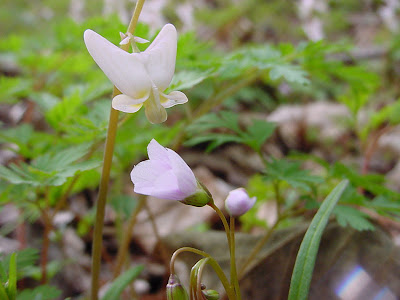 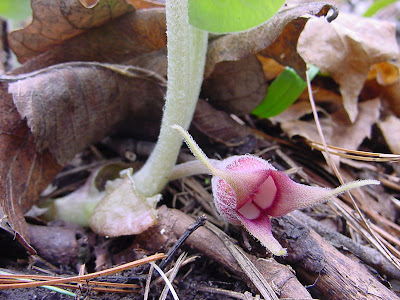 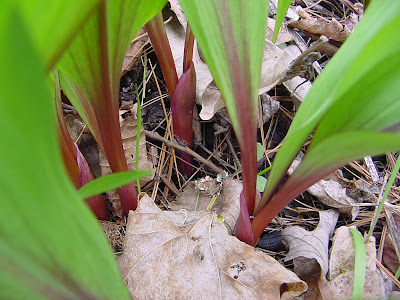 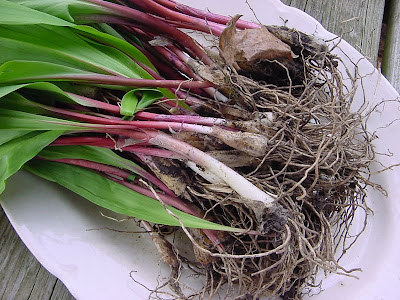 Ramps come up early in the spring, along with wild ginger, and Dutchman's Breeches, which my then little girl, Ursula, named Gentlemen's Pants. Now our family calls them that. Ramps are a kind of onion, or wild leek, so delicious that the sight of a patch of them makes my mouth water.

My favorite fairy tale collection, Tales from Grimm, written and illustrated by Wanda Gag, in 1939, includes the story of Rapunzel who was named for the rampion plants which grew in Mother Gothel's garden, a famous witch in the neighborhood. As the pregnant mother of Rapunzel gazed from her small window into the witch's garden next door "a strange feeling came over her. She had always been fond of rampion salad, and these plants in the witch's garden looked so fresh, so green, so tempting, that she felt she must have some, no matter what the cost." Though I've always thought rampion must be ramps, it turns out they are not the same. But the feeling that comes over me, pregnant or not, seeing a patch of wild ramps in the spring woods, is just the same.

The wife begs her husband to get some for her, or she fears she will die. Because he loves her so dearly, he climbs over a high wall at dusk, into the witch's garden, and quickly digs a handful of plants, and brings them back to her. "She was overjoyed, and immediately made a big juicy salad which she ate with great relish, one might almost say with greed." The cost of that handful of rampion was dear, of course. The witch claims the baby. Last Monday I did ask my husband to bring some ramps home, if he saw any. On Tuesday there was a bag of them on my kitchen counter. He is a good man.

Whoever eats ramps out of the spring woods in Wisconsin will certainly identify with the wife's strange longing. And will scramble through rusty barb wire, thorny ash, up steep hills, risking ticks, to get to the patch that looks so fresh, so green, so tempting-- while keeping an eye out for the witch. Or, alternately, send her husband.
Posted by Avalanche Looms / Susan Johnson at 11:34 AM

A lovely tale and mouthwatering ramps. I'll have to make my journey to collect some. And aren't the Dutchmen's Breeches simply lovely and plentiful right now? I must say that the Creeping (Creepy) Charlie is having a field day, too.

You know, I always wondered what the ramps that Rapunzel's mother craved were. My mom put me off by saying they were like dandelion greens....I knew people who ate those, so that made sense. (except there's so many dandelions....why would one need to climb a witch's wall?)

Lovely spring wildflower post. Now I'll have to go for a walk to look for the wild ginger. Thank you!

What a beautiful, heart warming and perfect spring post to start my day - my week. I really needed a good fairy tale right about now and you tell it beautifully! Thank you!

I have never seen a "Dutchman's Breeches although I think they are one of the most enchanting flowers. We have bleeding hearts - a close relative here in the Pacific Northwest and they are in full bloom. My wild ginger hasn't opened yet! What a treat to see yours.

i have the wanda gag volumes of grimms fairy tales, too, and she is my favorite teller of these tales. i also assumed ramps and rampion were the same thing, maybe because of the deep desire both seem to instill in those who have tasted them. i am not one of them. i have never yet tasted either, but hope to hunt my own someday. thanks for the lovely post!

ps a child in the kindergarten where i worked always referred to columbine blossoms as "fairy hats". we still call them that :)

thank you for the comment. I don't think Wanda Gag wanted to be known for her children's book illustrations, but they are so well told and drawn. Really good to read aloud. My books actually belong to my sister, if she ever asks to have them back