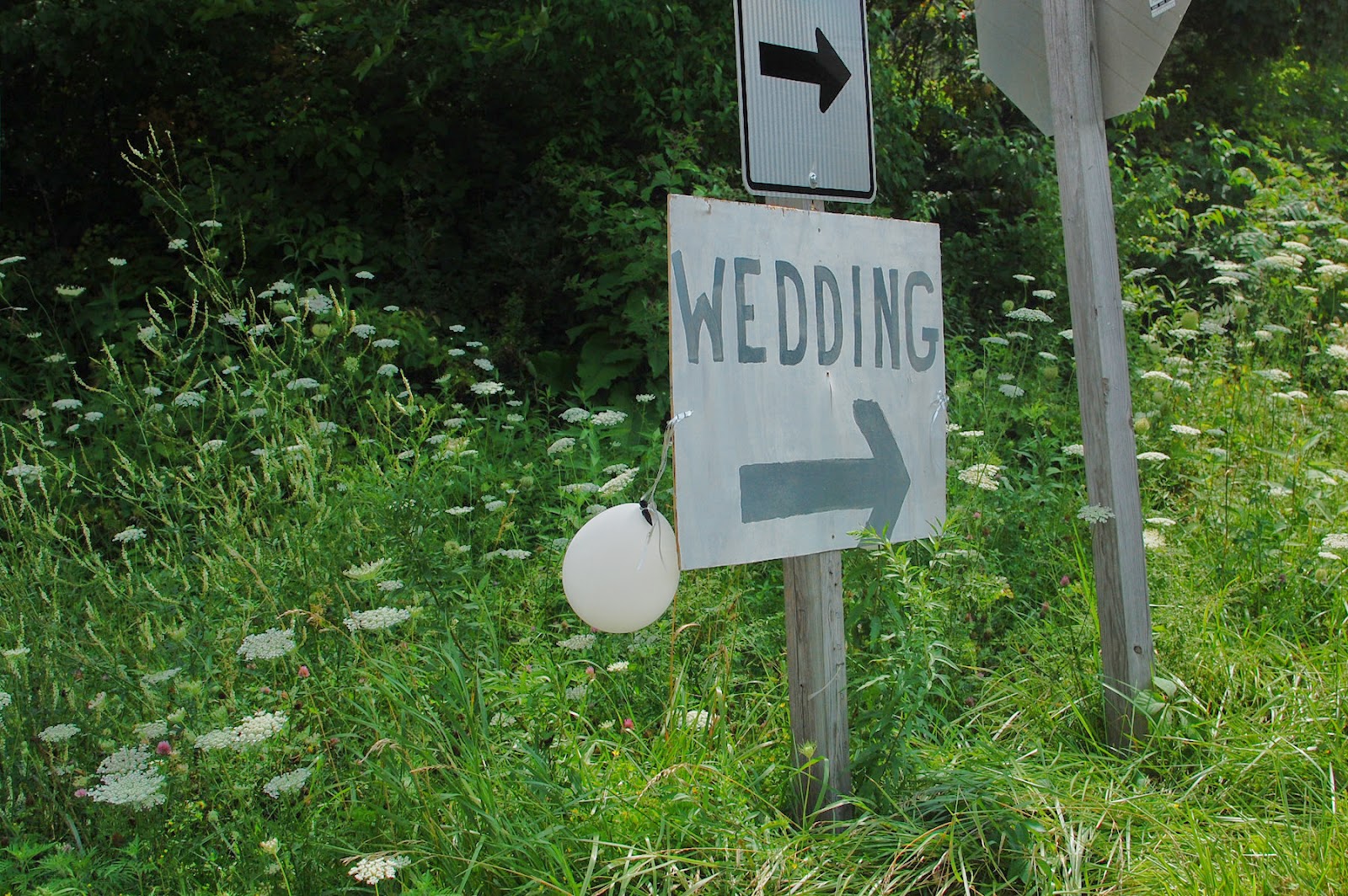 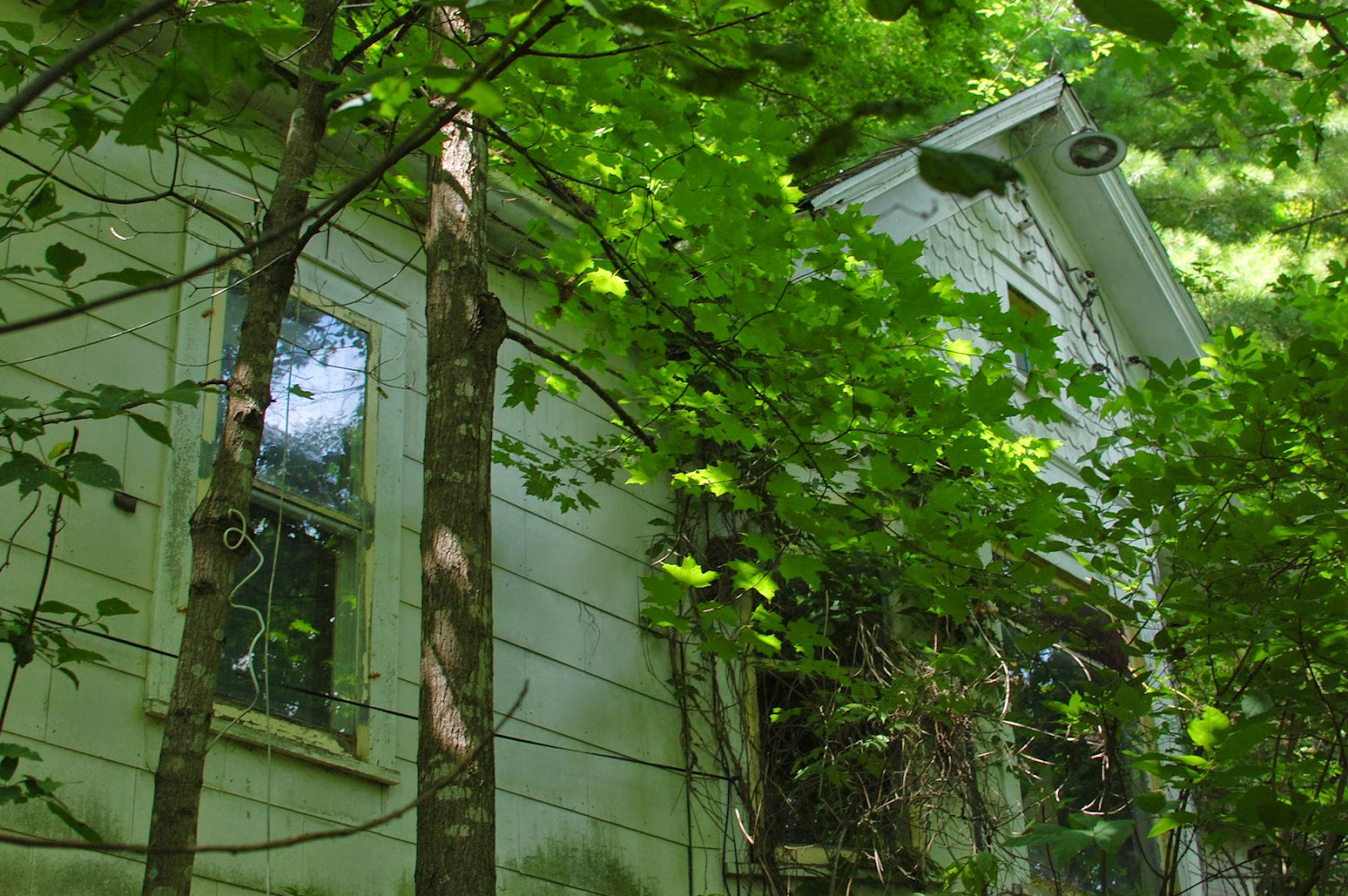 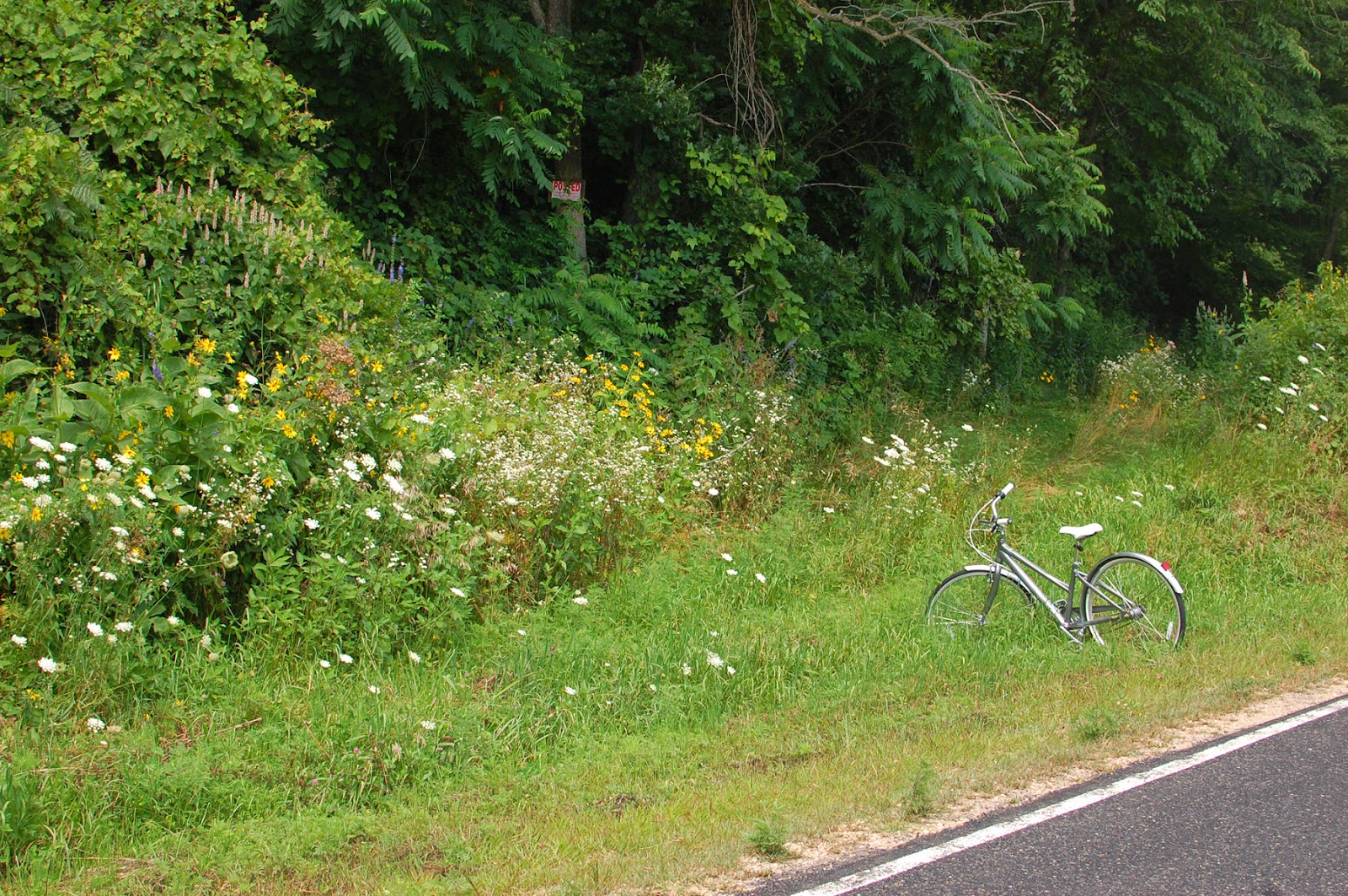 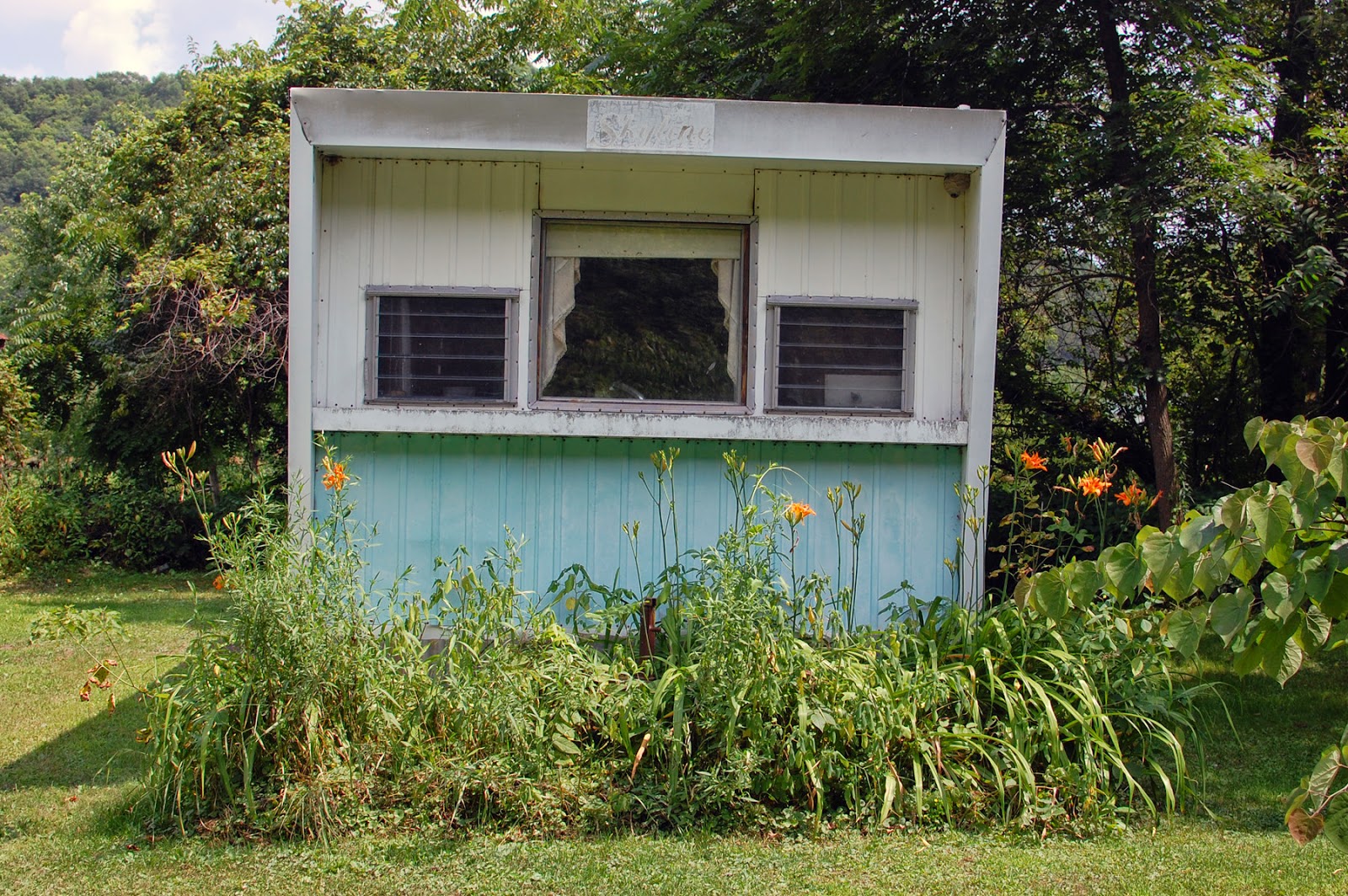 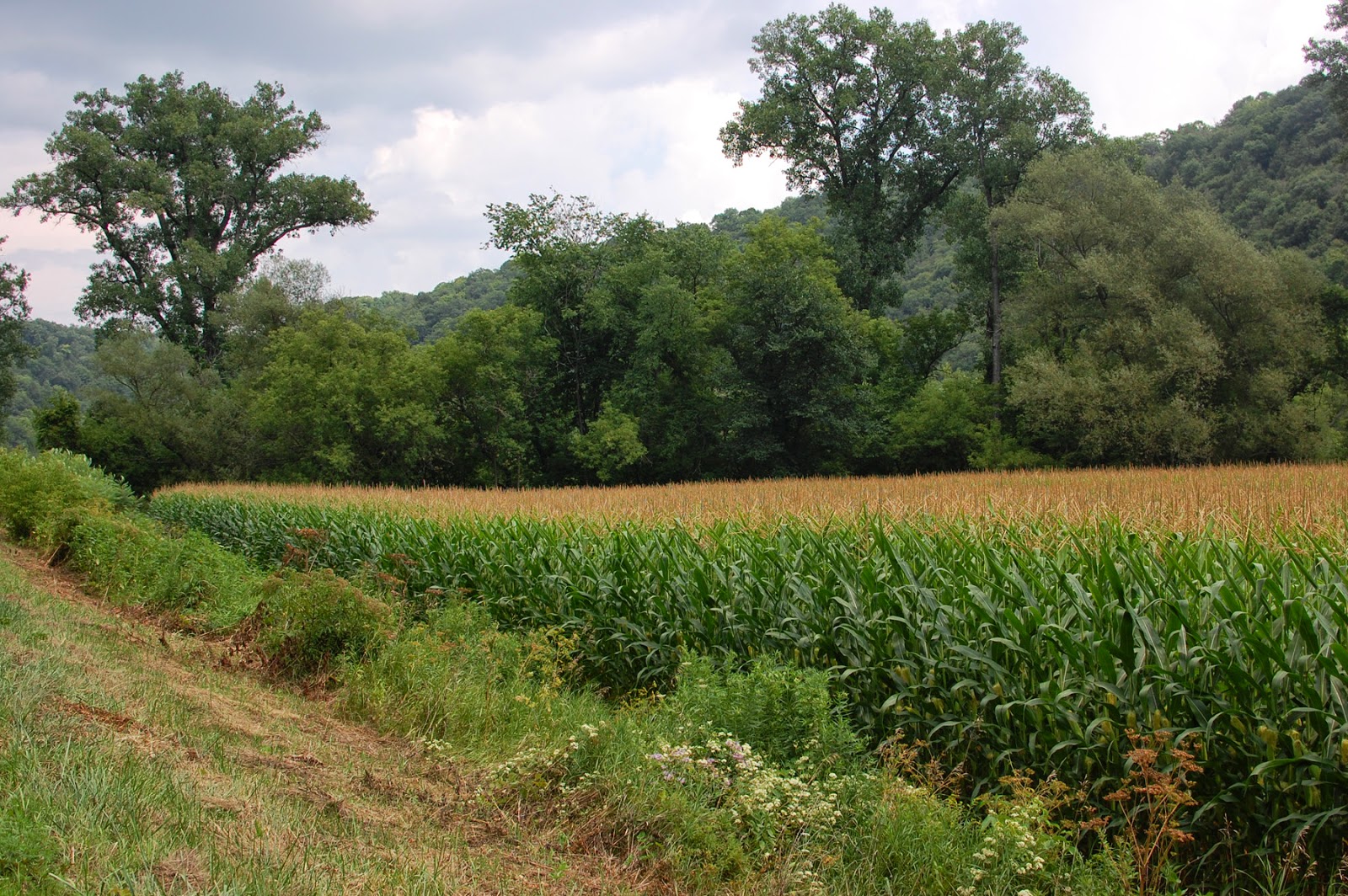 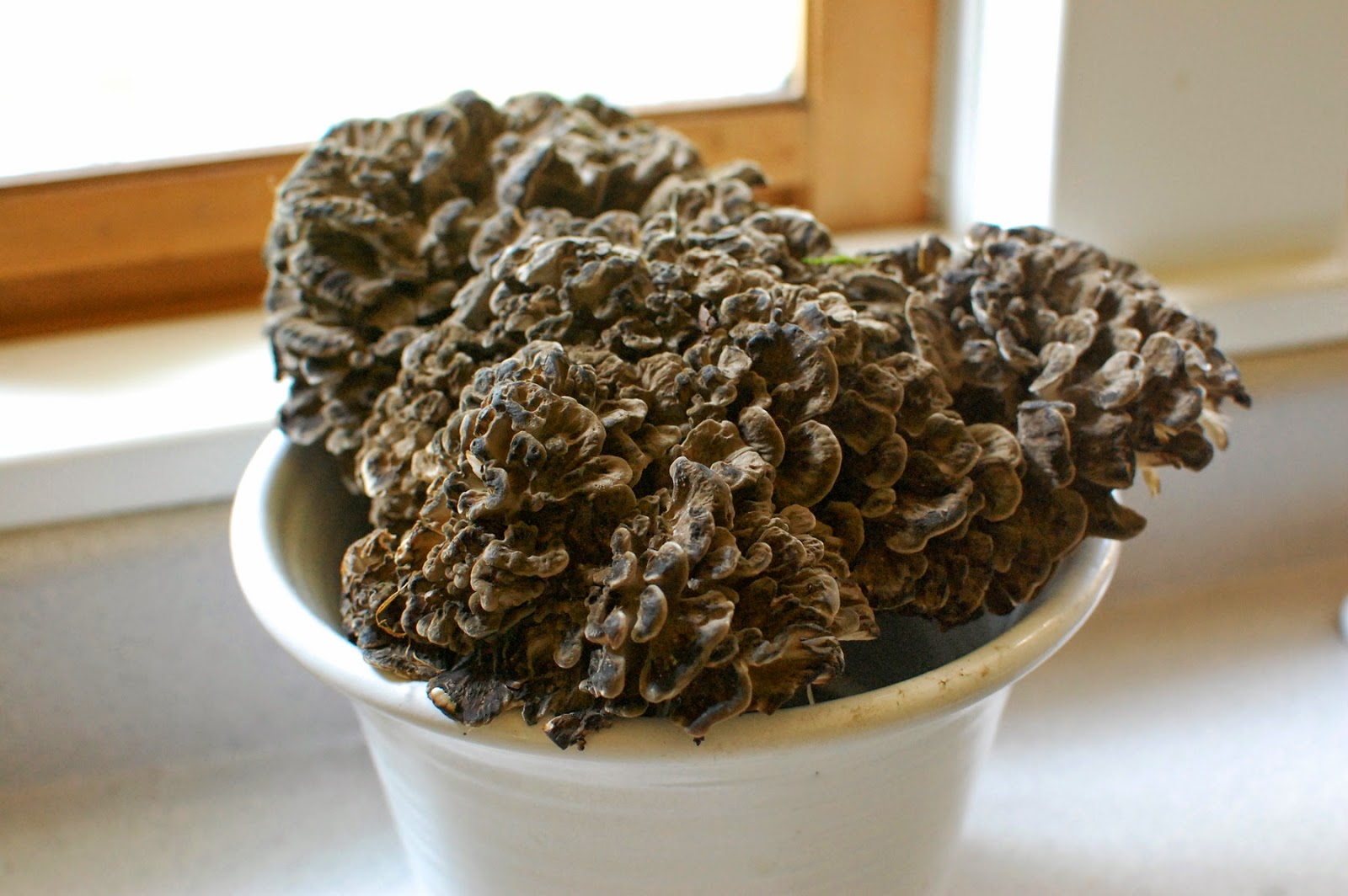 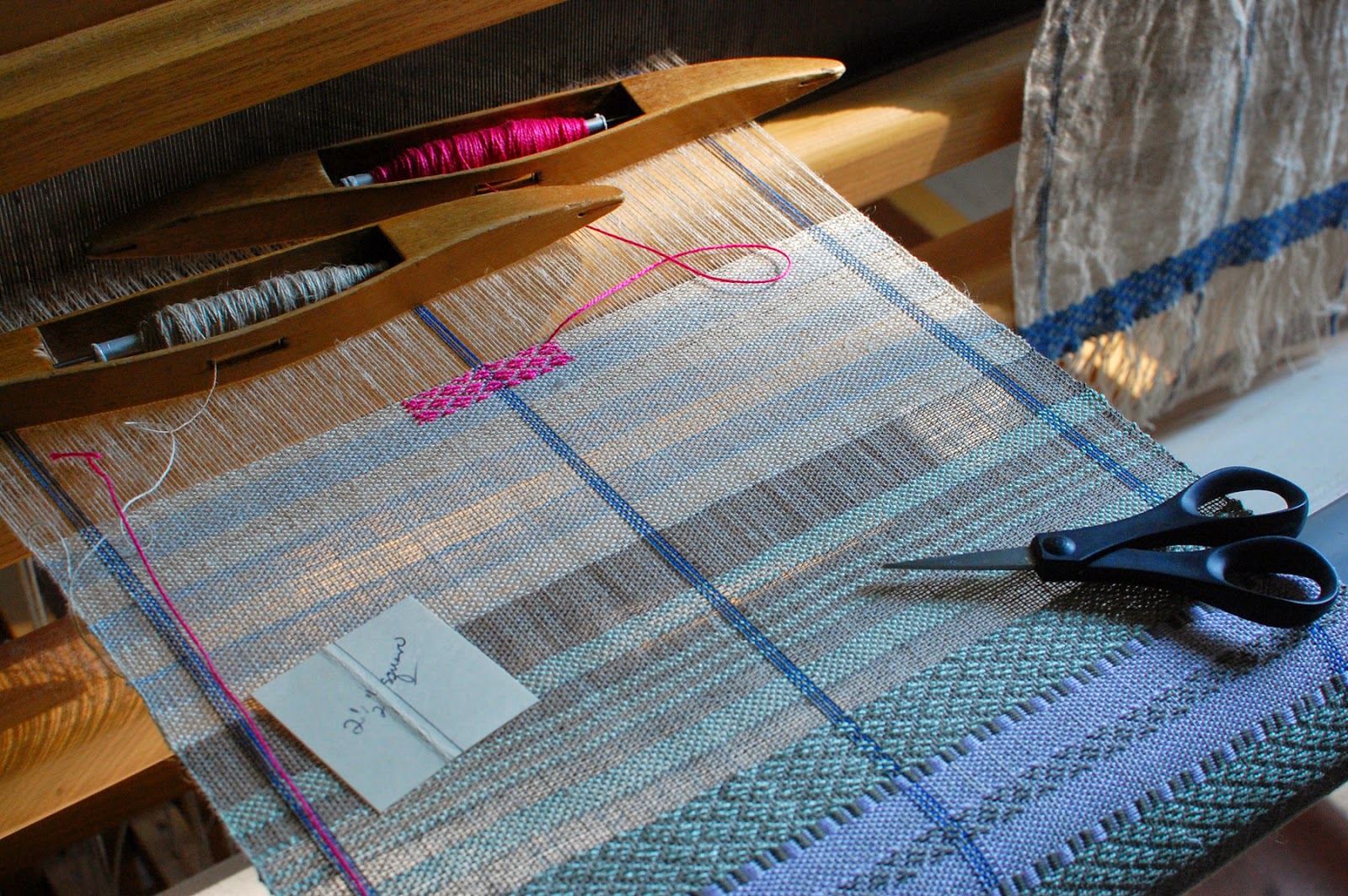 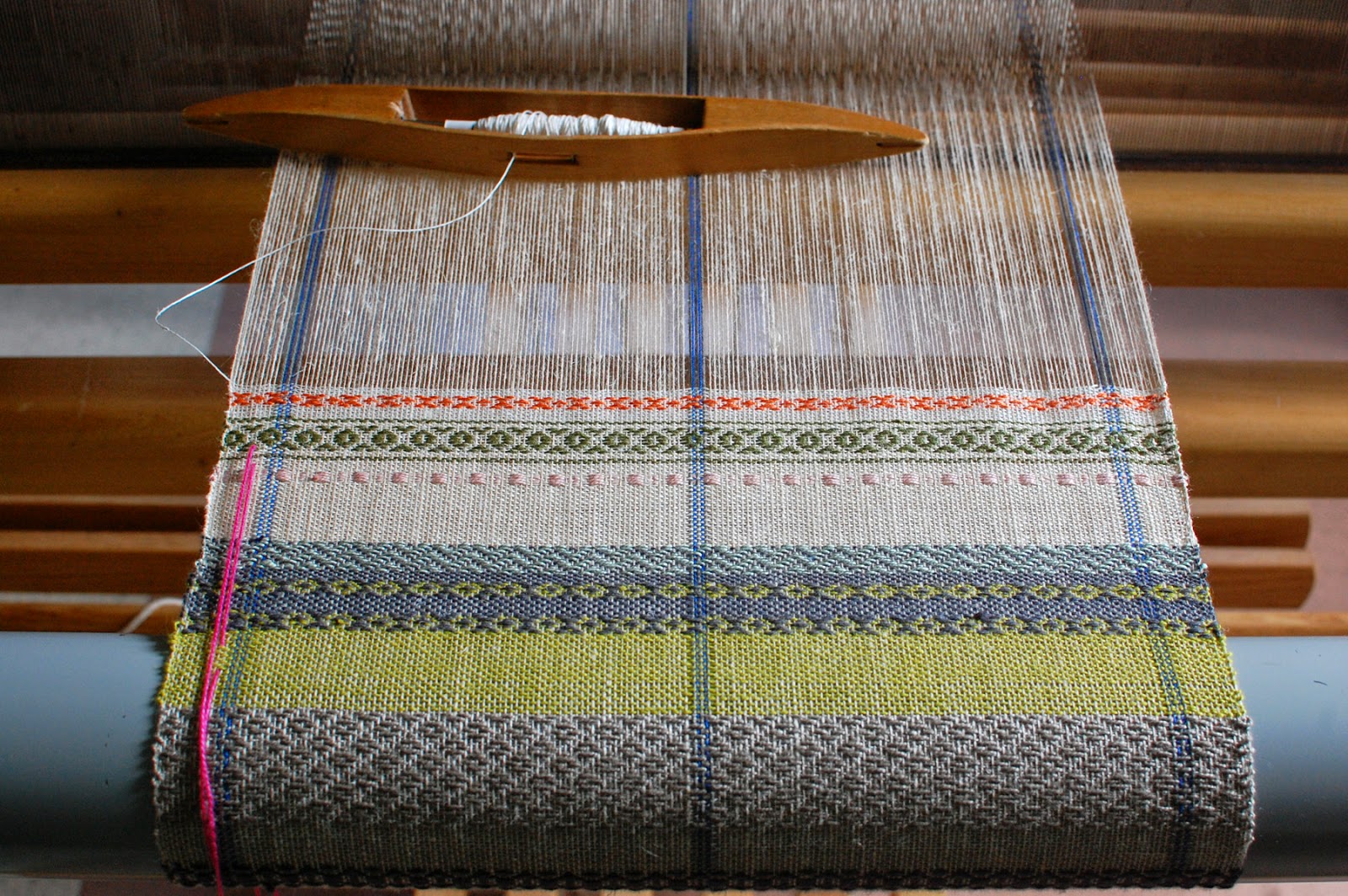 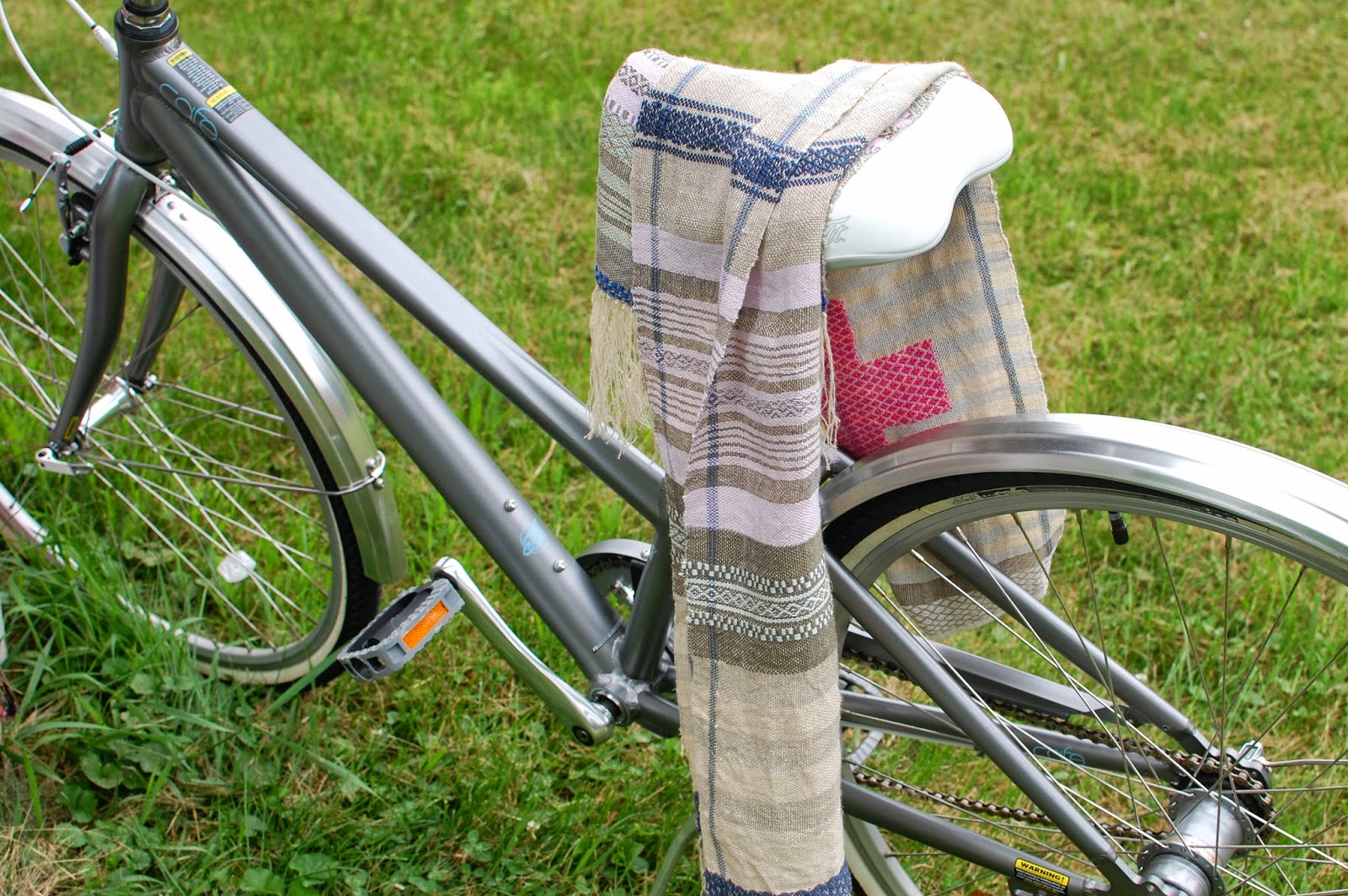 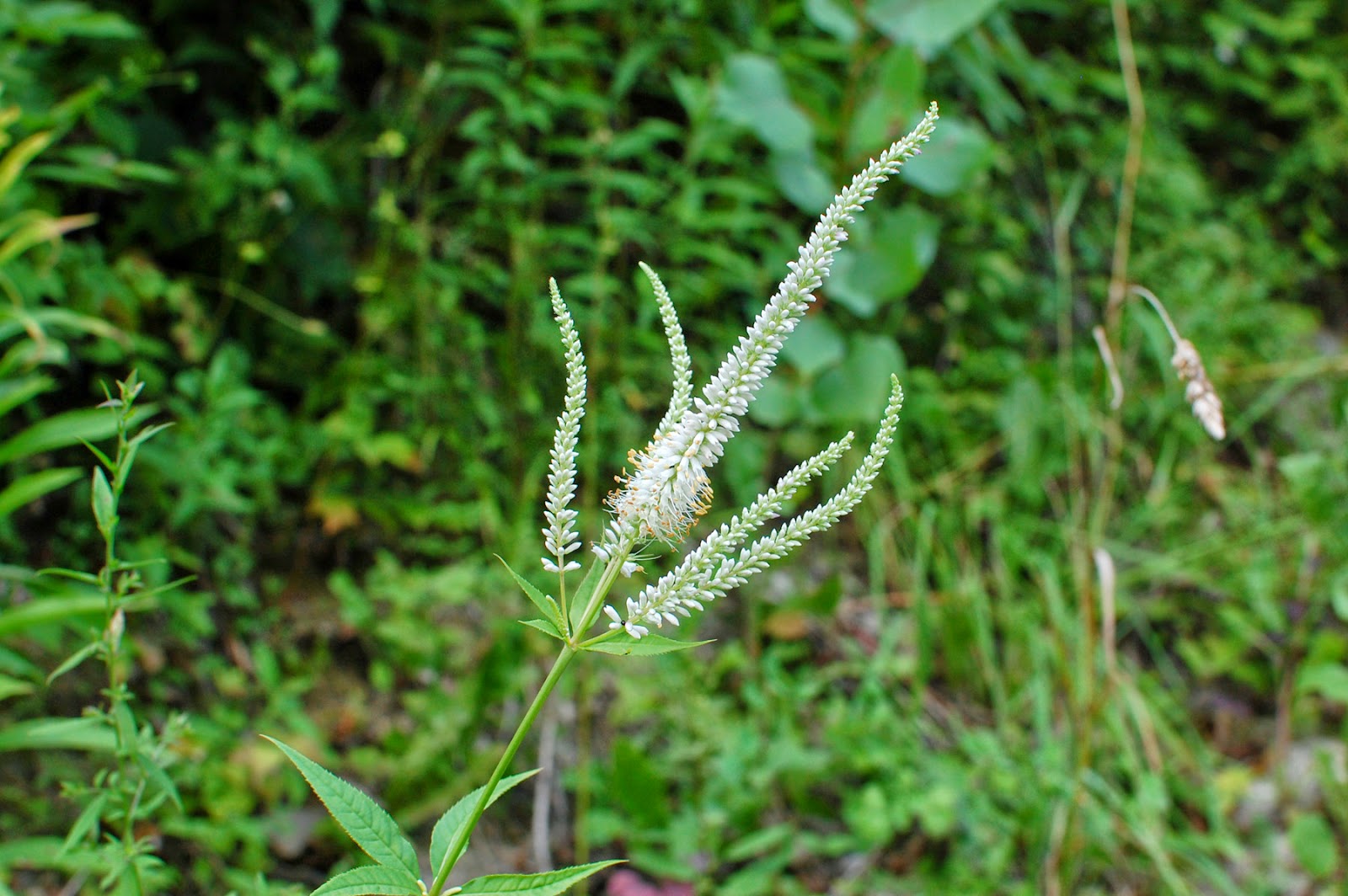 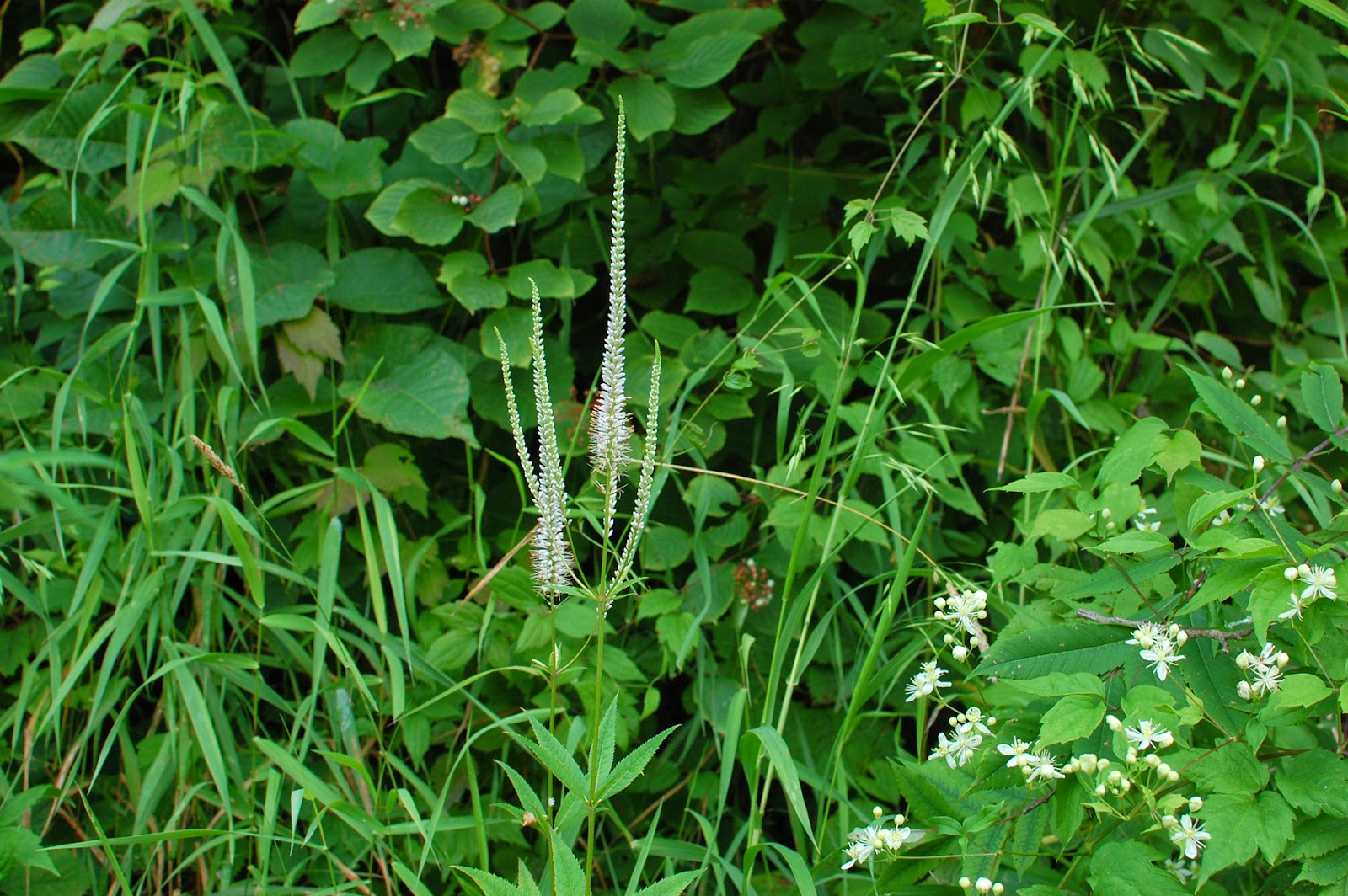 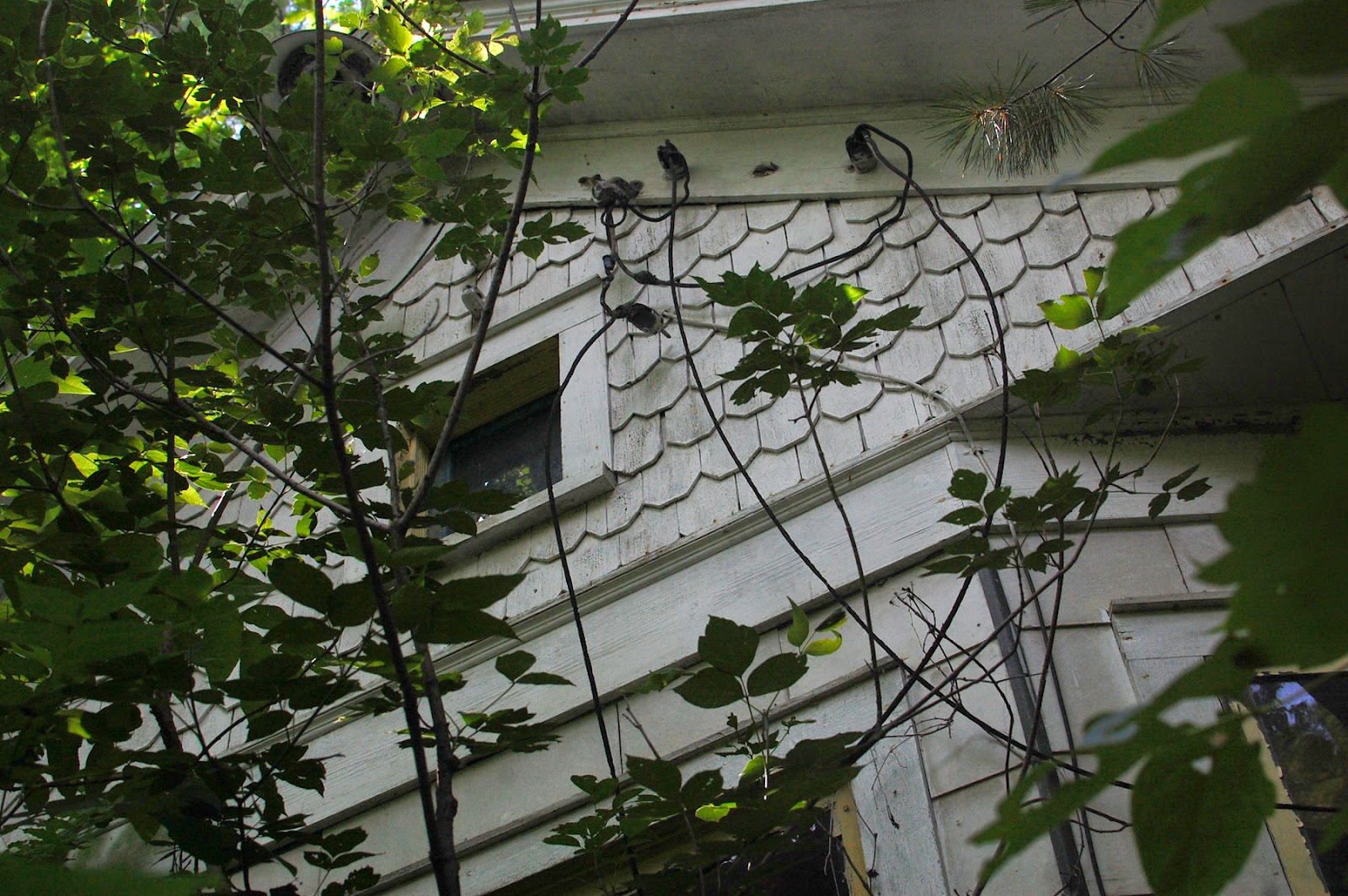 The wedding party celebrated in the campground across the road, kept us awake with a band playing loudly until the middle of the night. It was a soft, sweet summer night, with a few early Perseid meteors streaking across the north sky.  The half moon was still orange, though it was high overhead, because of smoke from all the forest fires burning now in the Pacific Northwest.

We have a fresh maitake (chicken of the woods ) mushroom to shred, fry in butter and oil, and eat to our heart's content. It is a rare treat to find one wild in the woods, that someone doesn't mind us
taking!

I ride my bike everyday this summer! Today,  I climbed up the overgrown driveway where Veva's house stands, though she died years ago.  She was the artist of Avalanche back in the day, and a very sweet woman.

When my kids were little we used to find our way up this path on Halloween night,  to Trick-or-Treat.  Veva came out on her porch wearing a little Martian helmet with springs sticking up on top. Little handkerchief ghosts came flying out of the woods on strings, pulled by a neighbor boy hiding in the bushes. Her house is tangled in brambles and brush now, and my hair bun got stuck in a blackberry vine while I was climbing the overgrown path to her place.

I felt a little panicky,  as I tried to untangle my hair from the thorn bush, because it was a little bit creepy up there, and I didn't want to hang around.  There was a rock root cellar behind the house, and the door was off. It looked black inside, and If I'd been braver, I'd have gone over to have a look. As it was,  I took a couple of pictures, just to prove to myself I went up there, and to my relief,  there is no face in any of the windows!

The trailer house is still empty where a popular shade tree mechanic lived when we first moved to Avalanche, but he also died years ago.

I started this blog quite a while ago.  At first I was afraid to write words and send them out on the Internet (no, really) so I just posted pictures.  One of my first posts was a picture of the fairy candle flowers blooming along the highway.   Here they are, blooming again!

The last picture is from my friend, Judith, who was recently in County Clare, Ireland, and draped
a scarf I wove on a rock there!  What a thrill for me to see it there.

Your weaving is so intricate and loving. I love the multitude of patterns.

The words - the story that you told - here in this post are just right Just perfect.

All so very beautiful.
x

Everything looks so green...it looks like Mother Nature is taking over the house. How special to see one of your beautiful weavings in Ireland. Thank you for sharing your story.

I really enjoyed today's post - the photos are beautiful, and I love to see photos of your lovely surroundings. I understand completely about being afraid to send your words "out there". I'm so glad you were able to get beyond those fears, as your writing is as lovely as your images and your weaving.
Laurie

;^))
very much enjoyed this post
the images and the words
the story of the old house
and you stuck in a vine made me smile
i could see it happen! ha!!

love from the netherlands
Patrice A.
x

You could write books! With pictures. When you have some free time from weaving and biking around. That is my awkward way to say that I have enjoyed this post very much.

Lovely fuchsia and lavender you are weaving!

What a lovely essay.

Your bike is very sleek-looking, as I'm sure you are as well with all that exercise riding and climbing.
It looks and is so lovely right here in Vernon County.
I agree with the other comments that we are all blessed to read and enjoy your blog. To get mentioned is a wonder too! Wonderful weaving! Treasures near and far.

i remember the first time i hit publish and how terrified i was. my stomach was in knots for hours. it became easier. now, that fear only strikes once in a while...writing words that are (essentially) published is as scary as those thorns in your hair.

Thanks everyone for reading! It's really a privilege to be able to try so many things out here & hear your ideas and different voices. I love it. I feel like I know each of you